Dani Sordo has maintained his lead over Sebastien Ogier on a dramatic second day of Rally Italy, with World Rally Championship standings leader Elfyn Evans up to fourth place.

After being forced to sweep the stages on Friday, the championship-leading Toyotas of Sebastien Ogier and Evans were released from their burden in Saturday’s road order and duly finished first and second on the opening stage of the day.

Ogier, third overnight, began to reel in M-Sport’s Teemu Suninen whose Ford Fiesta held a fragile overnight advantage in second place. The Cumbrian squad started the day’s running without the second Fiesta of Esapekka Lappi, which was unable to restart after losing all the water from its engine on Friday morning.

Further heartbreak was to follow for M-Sport as British youngster Gus Greensmith’s impressive run in Sardinia ended on Saturday when a rock knocked his alternator belt off in the middle of the third stage. He was able to replace the belt on the following road section but his battery was too far gone to be revived.

Suninen then suffered an issue with the centre differential that prevented him from using the handbrake to negotiate the many Sardinian hairpins. This in turn accelerated his slide down the order and the Finn ended the first loop of stages in fifth place.

Rally leader Sordo won the second stage of the day and Ogier won the third but Thierry Neuville, Hyundai’s only realistic contender for this year’s drivers’ title, closed in on Ogier throughout the morning. When Neuville won the fourth and final stage of the morning loop he leapt into second overall.

One name missing after Saturday’s second stage was Kalle Rovanpera who, after complaining that his Toyota was loose, clipped a tree which spun him 180 degrees putting him into another tree which tore the right rear corner off his Yaris.

After a lengthy afternoon service halt, the second loop of two stages repeated those run on Friday afternoon. 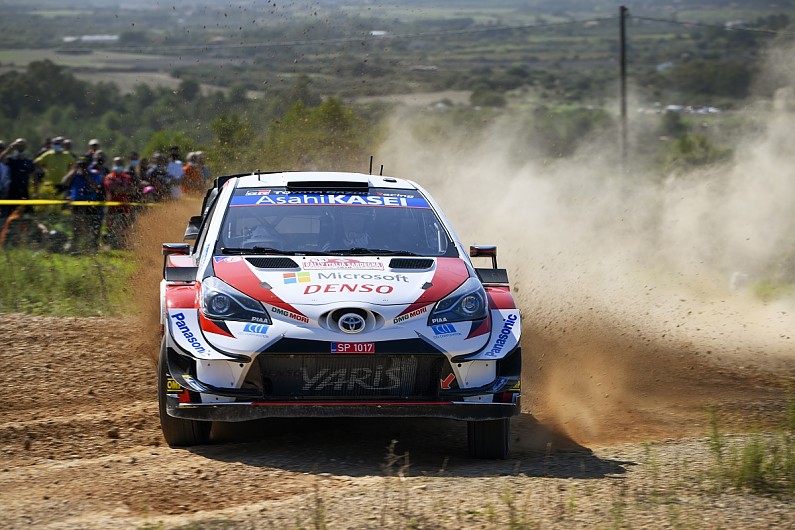 Championship leader Evans, in fourth place, suggested that the surface might have been ‘polished up’ by rally traffic moving in and out overnight. With his British Rally Championship-winning father Gwyndaf on the gravel crew, Elfyn usually gets good information.

The Toyota runners elected to mix hard and medium tyre compounds, while the Hyundais of Sordo and Neuville went for mediums all round.

Ogier won both afternoon stages and hoisted himself back into second place ahead of Neuville. The Belgian’s softer rubber was worn out and he was fortunate to escape after clouting a hay bale after running wide as he attempted to negotiate a narrow bridge.

“I tried very hard to be honest but it looks like they had a little bit more speed than us,” Neuville said.

“Maybe the tyres also made the difference and I lost maybe 1.5-2 seconds on the bridge where I just was a little bit too late on the brakes but when you’re pushing to the maximum it’s happen.”

Despite Ogier’s charge, Sordo still holds a 27-second advantage at the end of the 12th stage heading in to the final day. Like Neuville, his Hyundai’s tyres were ravaged by the afternoon stages.

“My tyres are completely destroyed,” said the Spaniard. “I was trying to manage a little bit for the end of the stage but seven kilometres before the end I started to feel that I was understeering too much so I started to take it a little bit careful.”

Ogier’s presence in between Sordo and Neuville at the start of the final day could be a blessing in disguise for Hyundai team principal, Andrea Adamo.

With only Neuville in a position to challenge Evans and Ogier for the 2020 WRC drivers’ title, the prospect of having to order Sordo, on a part-time schedule for the team, to hand over his well-deserved lead would not be popular.

For his part, Adamo just wants to see a maximum score for the manufacturers’ championship and is less concerned about his drivers.

“I have, in top of my mind, I have just in this moment the manufacturers’ standings and not the drivers’ standing,” Adamo said. “It will be difficult to tell Dani to go slow.”