Current Mercedes Formula 1 chief Toto Wolff says he has a successor in mind as team principal as he continues to ponder his future role with the team.

With his current contract at Mercedes expiring at the end of the year, Wolff has been in talks with Daimler for some time about his future as he considers which role he may take up.

Wolff has previously acknowledged that overseeing Mercedes’ domination of F1 and run to seven world titles has taken a toll on him, and that he was fearful of creating a talent bottleneck.

Wolff said earlier this week he was on the lookout for a successor, and that although he would be staying on at Mercedes, it could potentially be “in another function” such as “CEO or chairman”.

Speaking on Sky Sports F1 after Mercedes clinched a record-breaking seventh constructors’ championship in a row with a 1-2 finish at Imola, Wolff was asked for an update on his future.

“My situation is a little bit different, because I’m a co-owner with Mercedes of the team, so I’m never going to abandon it, because it’s just what I love to do,” Wolff said.

“What I said is that I believe everybody has a shelf life in a role. I haven’t come to the end of mine, I think I can still contribute.

“But I need to think about the future also going forward. Bringing somebody up, developing him doing this role, is something that is a fantastic challenge for me that will be one of the next chapters.

“But you will see me around for a while.” 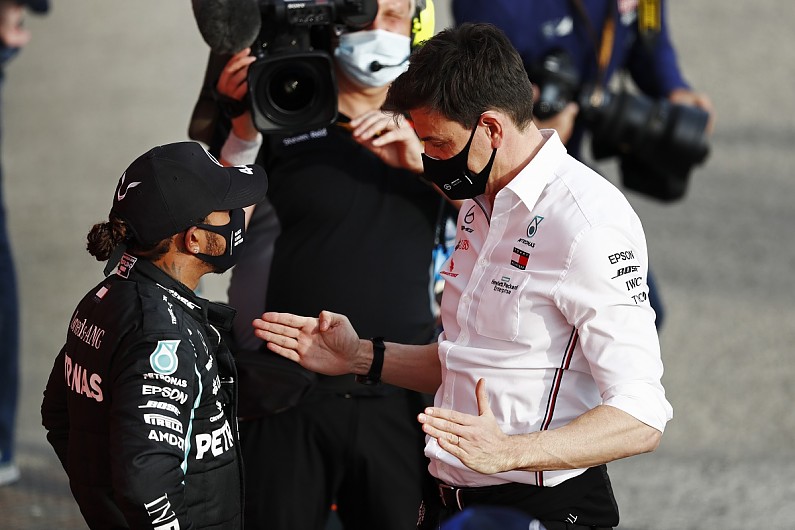 Asked if he had anyone in mind as a potential replacement, Wolff replied: “I have, but I can’t tell you.”

Wolff has previously overseen development of talent throughout the Mercedes team to ensure they continue to progress, as seen in 2017 when James Allison took over as its technical chief from Paddy Lowe.

Following his victory for Mercedes in the Emilia Romagna Grand Prix, Lewis Hamilton said he could “definitely understand” Wolff’s considerations, but was confident whoever ultimately replaced him would be more than capable of doing so.

“I don’t know who he will replace, but again, he is a leader,” Hamilton said.

“He’s not going to put anyone who is not up to the job. He will find the right people.

“That’s why we’ve had the success we’ve had, he’s found the right people and put them in the position to be able to shine as bright as possible. He has just empowered every person in this team to be the best they can be.

“He will find somebody who will be able to take it on and continue. But it’s not one person, this team is not about one person, it’s a collective of a lot of people. Toto doesn’t build the car. It’s a real team effort.

“But I’m supportive of him, whatever he wants to do moving forward.”

Hamilton’s team-mate, Valtteri Bottas, added that Wolff would be a “tough guy” to replace.

“He’s a smart guy, he knows what kind of support each team member needs, support and criticism, and how to help them to be better versions of themselves,” Bottas said.

“That applies to every single team member. He can read people well, he’s supportive. He’s done something incredible.

“He’s a great guy, and whatever he’s going to do in the future, I’m going to respect that as well. In the end, you’re living for yourself in this life.”