Toto Wolff has put a stop to speculation about fast-tracking George Russell into the Mercedes Formula 1 team in 2021 by formally confirming Valtteri Bottas will retain his seat.

Russell’s superb performance in last weekend’s Sakhir Gran Prix in place of Lewis Hamilton, who was absent due to COVID-19, led to speculation Mercedes could move the Williams driver into Bottas’ place for 2021.

However Wolff stressed that he remains loyal to Bottas, who has a 2021 contract with Mercedes, and made it clear Russell’s time will come.

“He’s going to be in our car, I’m hereby confirming it. We have a contract with Valtteri,” Wolff said.

“He’s going to race next year. You need to kick me quite hard in a sensitive zone for me to ever lose my loyalty. And I am loyal to my two race drivers.

“In the same way. I’m loyal to our junior drivers. George did a phenomenal job last weekend. He deserves to be in a great car one day. He has a contract with Williams for another year.

“They have been very flexible and accommodating in having George, giving George to Mercedes this other weekend, and everything is going to go its way. But calmly, and in a structured way.”

Wolff admits Bottas had been put in a difficult position over the Sakhir weekend, with Russell “having nothing to lose” and making such a huge impact on his one-off appearance. 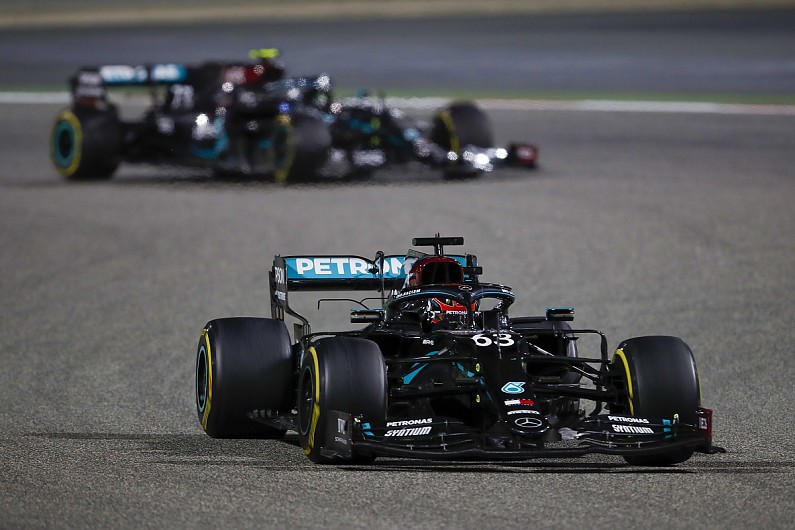 “I can relate to Valtteri’s situation, because you’re having this tremendously fast team mate who has won seven world championships, and Valtteri has shown really great performances,” he added.

“He won the first race in Austria, and he’s been on pole several times, and he should have won more races if it wasn’t for red flags or punctures.

“And then losing it again when bad luck was really part of your campaign feels miserable, and in that respect, I think that a driver can sometimes then slip into a bubble where you feel that things are going against you.

“In that respect, we had a good talk, an intelligent talk between us.

“It wasn’t like a eureka moment that suddenly I’ve been talking to him, I can just relate to his situation, and we’ve decided that we want to talk to each other more.”

Their renewed rapport was reflected in qualifying when Wolff took the unusual step of talking directly to Bottas on the radio ahead of his final Q3 run on Saturday, which Wolff said was a result of an agreement having been made between the pair to offer greater support.