In the aftermath of Saturday’s hectic Formula 1 qualifying session for the Turkish Grand Prix and Lance Stroll’s shock pole position, it briefly seemed his jubilation would be short-lived.

As the stewards picked their way through the various incidents in a messy qualifying that included two red flags and an hour-long Q1 session, pole-man Stroll came into the spotlight for a possible yellow flag infringement.

TV footage showed that Stroll’s team-mate, Sergio Perez, had spun ahead of him on-track during his fastest Q3 lap, resulting in a yellow flag being waved at Turn 7. Stroll was informed of the spin, but nevertheless set his fastest time and grabbed a shock pole position.

The stewards reviewed the incident and ultimately cleared Stroll, deeming that he had slowed down for the yellow flag, but that the telemetry data had not shown as much due to the significant time gains made elsewhere in the changeable conditions.

McLaren driver Lando Norris was also investigated over a yellow flag incident, concerning Nicholas Latifi’s spin at Turn 8 towards the end of Q1.

While Norris was also deemed to have slowed down for the yellow flags, he still got copped with a five-place grid penalty that dropped him back to 16th on the grid.

So why was there such a big difference in the penalties applied to the two drivers?

The single-waved yellow was shown at Turn 7 following Perez’s spin, prompting Stroll’s engineer to inform him of the need to ease off. 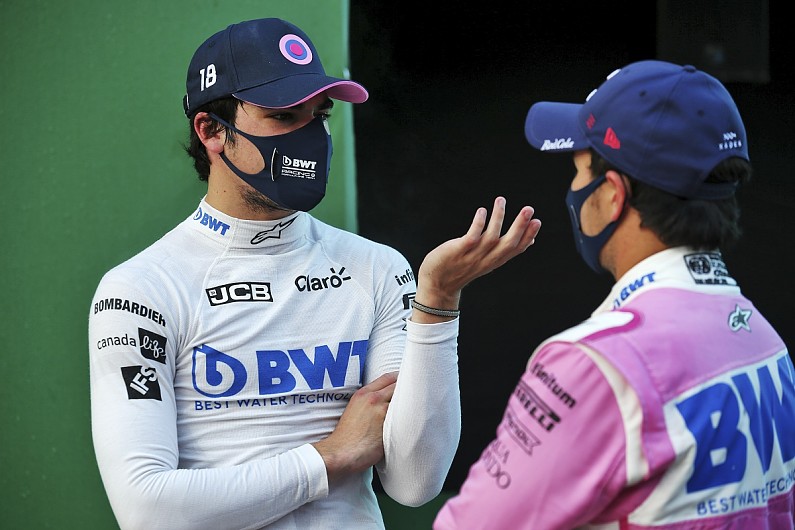 The telemetry showed that Stroll “clearly came off the throttle, coasted into the corner, and then accelerated when clear of the incident”, as per the stewards’ report.

As Stroll exited Turn 8, his engineer came back on the radio to say: “That was a single yellow so keep pushing.”

It was an important message, as even thought Stroll had slowed for Perez’s spin, had there been double yellow flags, he would have been forced to abandon his lap completely.

This is where Norris tripped up. The stewards noted that although the McLaren driver “was not attempting to set a quick lap time, due to the changing track conditions, he nevertheless did so and thereby breached the referenced regulations”.

The regulations in question are buried in Appendix H of the FIA’s International Sporting Code, which straightforwardly explains the meaning of the marshal flag signals.

Under double-waved yellow flags, it reads: “Reduce your speed significantly, do not overtake, and be prepared to change direction or stop. There is a hazard wholly or partly blocking the track and/or marshals working on or beside the track.

“During free practice and qualifying, it must be evident that a driver has not attempted to set a meaningful lap time”. It then clarifies that “this means the driver should abandon the lap”, although there is no requirement to pit.

Therefore as the track improved significantly and offered huge gains to drivers, even when trying to back off and abandon the lap, Norris’s improvement was enough to trigger a sizeable penalty.

And in Stroll’s case, the fact it was just a single-waved yellow meant he was free to complete his shock charge to pole position, and ensure his fairytale day did not end on a sour note.