Maverick Vinales’ title hopes have been dealt a blow as he will have to start the MotoGP European Grand Prix from pitlane after Yamaha had to exceed his engine allocation.

Vinales admitted on Thursday he had to limit his practice mileage at Aragon over engine life fears, and has had to do the same this weekend at Valencia.

The Spaniard had an engine withdrawn from his allocation of five for the season after the Spanish GP due to reliability concerns, following a failure in the first Jerez race for team-mate Valentino Rossi.

Vinales had unsealed all of his allocated engines by the Andalusian GP, and since the San Marino round has been exclusively using just his fourth and fifth units.

With three rounds still to go, Yamaha has confirmed Vinales – who is just 19 points from the championship lead ahead of this race – will have to start Sunday’s grand prix from pitlane as the marque fits a sixth engine.

“We’ve been waiting for the penalty [over engine legality] to make a decision [regarding Vinales’ sixth engine], but now we are forced to use the sixth one,” Yamaha boss Massimo Meregalli confirmed to Italian television.

“So, he will start from the pits on Sunday.” 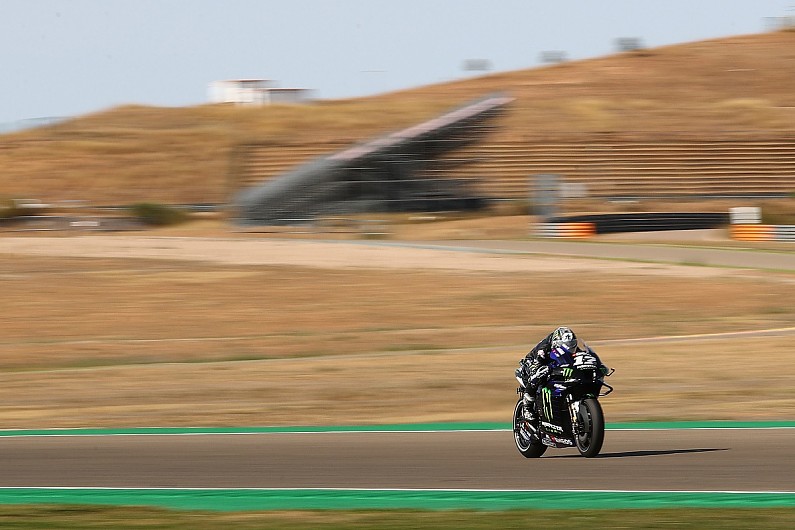 Ricardo Tormo is notoriously a tricky circuit to overtake on, with Vinales’ team-mate Rossi experienced in this having come from last to fourth in the 2015 Valencia GP.

Vinales’ engine penalty comes in the wake of Yamaha being found guilty of fielding engines in the Spanish GP that contravened the regulations.

All four Yamaha riders ran an engine at the Spanish GP which featured valves not originally submitted with the sample engine pre-season for homologation.

Because this change of valve was not unanimously agreed upon by the manufacturers’ association, Yamaha was penalised – though the engines used following the Spanish GP featured the homologated valves.

Governing body the FIM docked Yamaha 50 points from the constructors’ championship and 20 from the factory squad’s teams’ title haul, while Petronas SRT has lost 37 points.

Yamaha called this infringement an “internal oversight” and claims the two valves were the same in design.

Ducati said on Friday the ruling sets a “dangerous” precedent, while Suzuki claimed it will cast a “shadow” over the championship should Yamaha win it. Penske yet to make decision on McLaughlin or Supercars future – IndyCar