The Yamaha rider was forced to start from pitlane after his team had to exceed his engine allocation for the season to fit a sixth one.

This compounded a miserable weekend for the Spaniard, who also had to contend with a depleted crew after one of his team members tested positive for COVID-19 which forced four more personnel into isolation.

Vinales salvaged 13th from the race, though largely benefitted from attrition ahead of him, and crossed the line 25 seconds off victor Joan Mir.

Admitting his title chances are pretty much impossible now with two races to go, Vinales says the bigger issue is he was “very far off [in terms of] speed” during the grand prix.

“Yeah, for sure,” he replied when asked if his title hopes were over. “I mean, Mir has to do a mistake and I need to win one race and be second.

“So, for sure it’s very difficult. Honestly, I don’t even think about it.

“Our problem is not the championship, it’s totally other things. Right now, we are very far off [in terms of] speed and it’s what we need to recover.”

When asked if the next two races will now become a test session for 2021, he added: “At the moment, we don’t have any new parts to try during the last two races, so I don’t know. 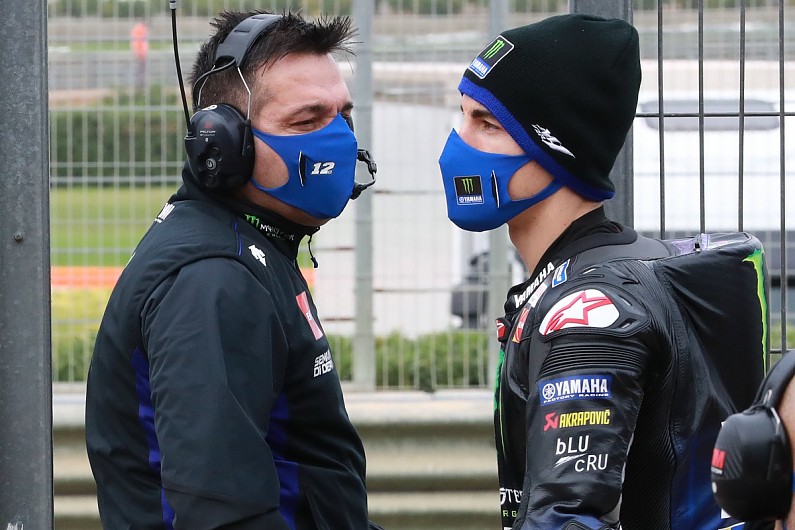 “I don’t know really what was going to happen because we don’t have more information on the bike we have now.

“So, we’ll see. For sure Yamaha is working, they understand that we have problems, that we are in trouble and for sure they will try to work.”

Mir’s victory elevated him 37 points clear in the championship standings, and needs simply to finish on the podium in next weekend’s Valencia GP to secure the title.

Vinales is now just four points behind top Yamaha in the standings Fabio Quartararo, whose crash on Sunday means he’s level on points with Suzuki’s Alex Rins, with the pair both 37 points off Mir.