Max Verstappen says he feels “upset” to have qualified second for Formula 1’s Turkish Grand Prix because he “looked very comfortable” at the head of the pack before Q3.

The Red Bull driver had topped all three practice sessions – the two in the dry but low-grip conditions on Friday and then again in the wet FP3 running on Saturday – and had topped the times in Q1 and Q2 by massive margins.

He also led the way after the first runs in Q3 and looked set to improve the provisional pole time before he pitted to switch to the intermediates after Racing Point’s Sergio Perez had gained considerably on that compound.

The Dutchman struggled on the inters, not finding the grip and balance he had previously enjoyed on the extreme wets despite lapping faster.

“I’m just upset because the whole weekend we are actually first, and it looked very comfortable, and then you lose out in Q3,” Verstappen said in the post-qualifying press conference.

“At the end of the day, I don’t care where the Mercedes is [Lewis Hamilton and Valtteri Bottas, Verstappen’s regular top three companions in 2020, qualified sixth and ninth] – I just look at our performance. 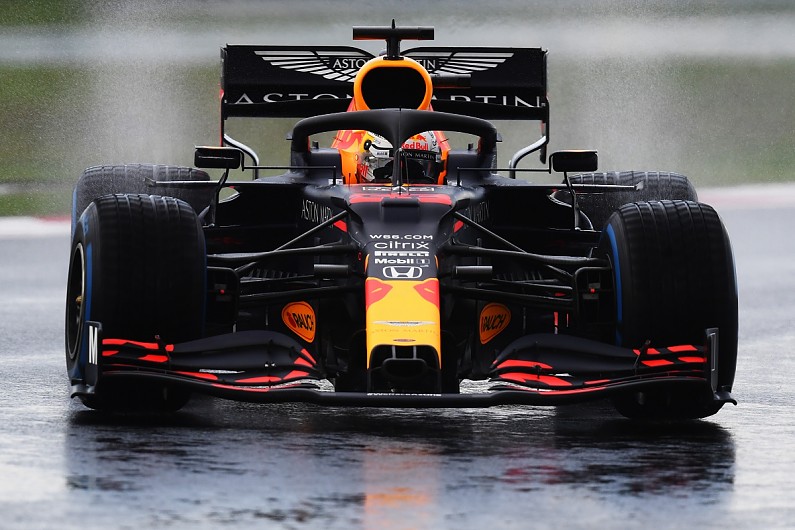 “You can’t look at other people’s performance to judge your performance, you have to look at yourself. And clearly in Q3 it was not good.”

Verstappen’s second place on the grid for the first F1 race in Turkey since 2011 will be his equal-best grid spot of 2020.

But despite this, Verstappen said “it’s the first time I sit here upset” in the post-session press conference.

He added: “I think that says it all.

“It was all going quite well on the wet tyres, but already in Q1 when I tried to go on the inters [they] were just not working at all, even compared to other people on inters around me.

“So in Q3 I was not very sure to go on inters because I felt really comfortable on the extreme tyres.

“So once we boxed and we went out, I had no grip at all compared to the laps I was doing before. Just very disappointing to be second.

‘[I had] no grip, no front grip. Especially where there was a little bit more standing water, I was struggling a lot.

“Through the fast corners was alright, but I just felt the shattering [in high gears] – so the front tyres were not gripping up.”

When asked if starting his late-Q3 laps on the intermediates behind Kimi Raikkonen’s Alfa Romeo had impacted his final attempts to get back to P1, Verstappen said: “Possibly a bit, but I don’t want to blame it on that.

“For us that tyre was just not working, so we just need to look into that.”