Red Bull Formula 1 driver Max Verstappen insists he is not worried that “time is ticking” on his dreams of winning the world championship.

The Dutchman and his team had hoped to become F1’s youngest ever title winner, but Mercedes’ complete dominance in the turbo hybrid era has put an end to that prospect.

Verstappen is already too old to beat Sebastian Vettel’s record of capturing his first world crown aged just 23 years and 134 days in 2010.

But despite missing out on that accolade, F1’s youngest-ever race-winner says he is far from concerned about the situation he is in.

“Of course I would like to fight for the championship [in 2021], but we’ll have to find out,” he said, speaking to Autosport.

“I mean, I’m still very young. And of course, you know, people say time is ticking.

“Also, you know, sometimes you cannot force things, so I stay calm.”

Red Bull is confident it can make progress after getting to the bottom of problems with its troublesome RB16 towards the end of 2020 and with Honda set to bring an all-new engine for its final season in F1, Verstappen is optimistic that progress will be made this season.

“But I also expect others to have a step, so I just hope that that ours is a bit bigger than the others.” 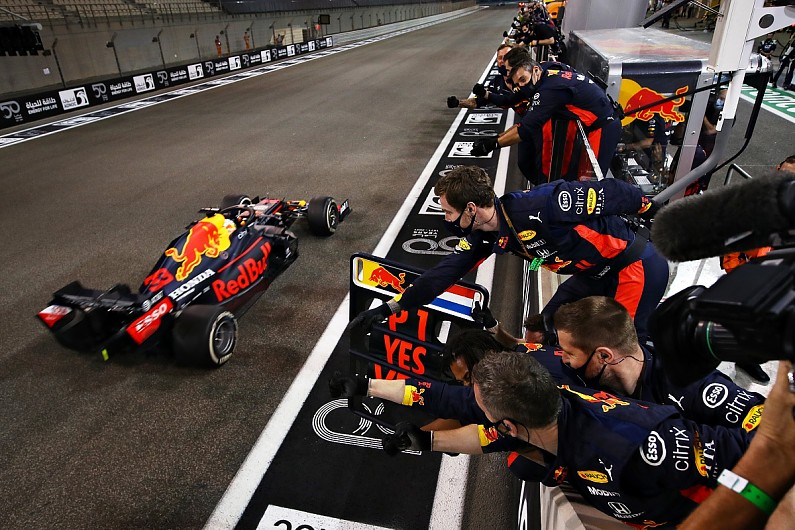 But while Verstappen will start the new campaign boosted by his victory in last year’s season finale in Abu Dhabi, Red Bull is under no illusions about the task it faces in taking on Mercedes, with team boss Christian Horner explaining that its B-spec 2021 challenger needs to be more of an all-rounder capable of performing on all circuits.

PLUS: How Red Bull fell short of challenging for the 2020 title

Verstappen’s father Jos, who made 106 F1 starts between 1994 and 2003 for the Benetton, Simtek, Arrows, Tyrrell, Stewart and Minardi teams, is clear that a good start to 2021 is more important for his son than how the last campaign finished.

“It is nice to win the final race of the season, but it is even better to win the first one next year,” he said.

“It is nice to win the final race of course for the feeling of people in the factory, this gives an extra boost to everyone.

“But it is even more important that we are able to win the first race next year, that would indicate that we have a car to compete with and that is what we have missed a bit.”

Asked by Autosport about the chances of closing the gap to Mercedes, Verstappen Sr said: “I think the changes in the regulations that are there for 2021 are still quite significant, the rest of the car has to be adapted to the changes being made to the floor.

“It’s mainly about aerodynamics so they have to get that right and we hope that Honda will bring something extra as well.

“In that case we will look a little stronger than we did.” Haas fires up VF-21 F1 car prior to Bahrain test