Max Verstappen feared a repeat of his Imola tyre failure after reporting vibrations en route to victory in the Formula 1 season finale in Abu Dhabi.

Verstappen went lights-to-flag to take his second victory of the season for Red Bull, ending Mercedes’ streak of victories in the Abu Dhabi Grand Prix that dated back to 2014.

Verstappen never came any under real pressure at the front of the pack, quickly building a lead in the opening stages before the safety car period brought forward the planned pitstop window.

He eventually crossed the line more than 15 seconds clear of Mercedes’ Valtteri Bottas, marking a strong end of the year for Red Bull.

“It was an enjoyable race,” Verstappen said. “We had a decent start, and from there onwards, I could manage the gap and could look after my tyres.

“The safety car came out at a little bit of an unfortunate time I think because we then had to do a very long stint of course on the hard. Luckily the tyre coped with it, but you still have to manage it a bit more.

“The car was really good today, and just a good balance so then you can look after your tyres and I could just build a gap all the way through the race.” 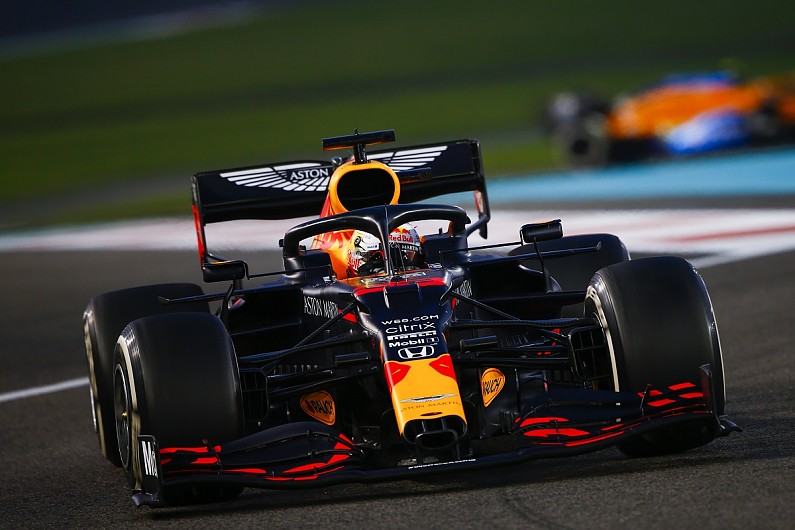 Verstappen was heard on team radio reporting a vibration with 11 laps remaining in the race, asking his engineer: “Did you see that, out of the corner how much vibrations and oscillation?”

The Dutchman revealed after the race that it left him fearing a repeat of the tyre failure that saw him spin out of second place at Imola earlier this year.

“I was thinking back, a little bit at Spa, but of course Imola,” Verstappen said.

“I was keeping an eye on it on every straight. But luckily it was all good.

“The pace was still there, the tyres were still performing.”

Verstappen admitted he was surprised that Red Bull was able to outpace Mercedes in Abu Dhabi, but that it proved the need to start seasons stronger if it wanted to mount a title challenge.

“I didn’t expect before I got here to win the race and be on pole,” Verstappen said.

“I also read that they had to turn the engines down a bit, so of course that’s not helping for them.

“In general, I think the car performed very strong, and I think better than expected, so of course very happy with that. It’s a great way to finish the season, a good boost for everyone in the team.

“I just hope that we learn from the previous years that we have to be stronger in the beginning of the season to be able to give them a little bit of a harder time.”