Verstappen ended up 0.256s clear of Gasly and 0.422s ahead of his title rival, but all three might have been beaten by Valtteri Bottas had the Finn not run too wide through the final corner when set to usurp the Red Bull’s position at the head of the times during the qualifying simulation efforts in the middle of FP1.

Lando Norris set the first-place benchmark at 1m08.864s on the early running on the medium tyres at the Red Bull Ring, which was quickly pushed down by a flurry of faster times set on the yellow-walled rubber.

Charles Leclerc put in a 1m08.011s before Hamilton brought the benchmark under the 1m08s bracket for the first time with a 1m07.809s, as the drivers quickly found time each time they went for a lap in the extended early runs.

A minute after Hamilton’s initial personal best was set, Verstappen put in a 1m07.454s, which his title rival bettered the next time by – on a 1m07.056s.

Running the Mercedes’ wake, Verstappen then immediately stole back to the top spot on a 1m06.936s.

Verstappen eventually worked the quickest time on the mediums down to a 1m06.511s towards the end of the opening 20 minutes – after losing a slower time that had briefly stood as the session’s then best time for running too wide out of the final corner, which was an area where several drivers lost time for exceeding track limits.

Mercedes led the pack out on the soft tyres at the start of the middle segment, with Hamilton taking the red-walled rubber back to the top spot on a 1m06.390s.

Bottas then leapt up the order after sitting at the bottom of the times at the end of the medium-tyre running, going quickest on a 1m06.386s – his second lap on the softs – with 25 minutes of the session completed. 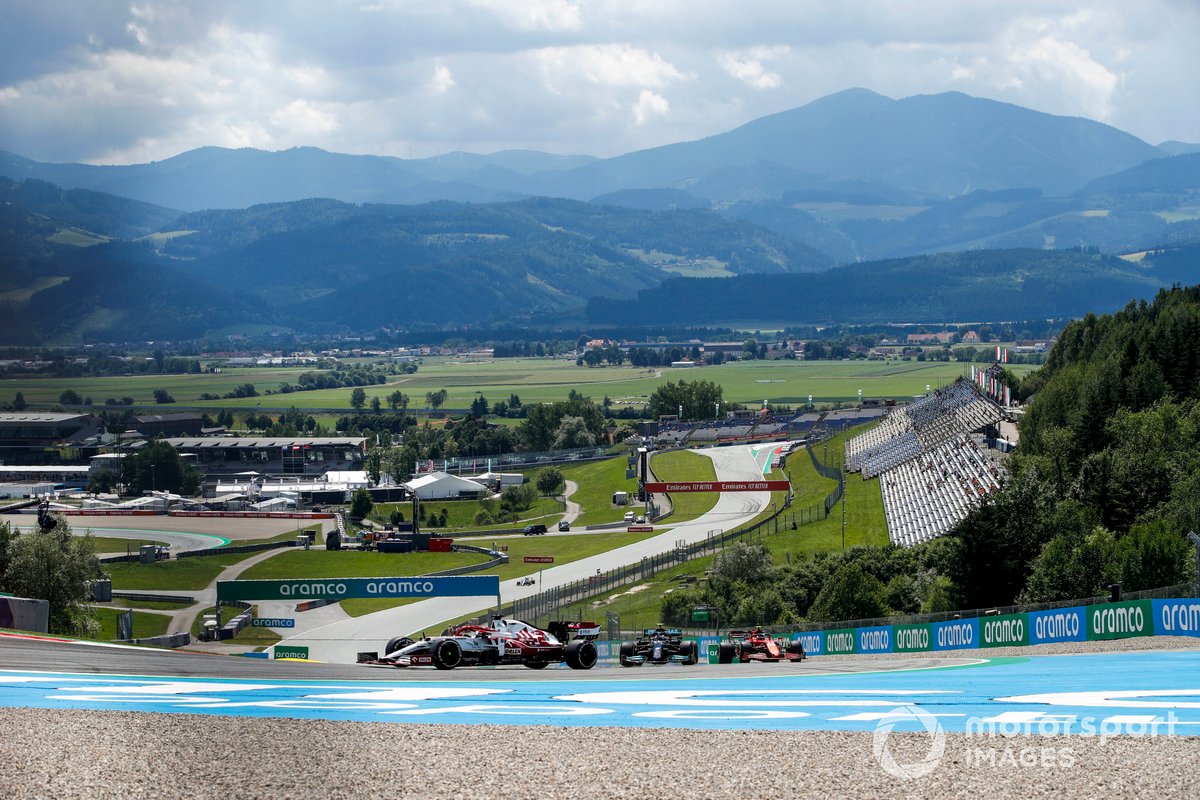 Hamilton then moved back ahead of his team-mate with a 1m06.332s, which stood as his best time until the end of the session, despite his car clouting the large kerbs beyond the normal red and white kerbs exiting the penultimate corner (the lap was legal because Hamilton’s right-side wheels remained on the normal kerbs) which produced a big cloud of dust as the car’s plank struck the larger kerbs and rubbed along it.

Red Bull then sent its cars out on softs just past the session’s halfway point, but the time they were now aiming for was Gasly’s 1m06.116s – the AlphaTauri driver having been among the leading drivers throughout the early running.

Verstappen duly retook first with his first lap on the softs, a 1m05.910s, which stood as the best time for the rest of FP1 as the teams switched to long run data gathering in the final 20 minutes, with Friday’s second session currently threatened by rain.

Running behind Verstappen, Bottas was going for another flying lap on the softs and he put in the session’s fastest times in the opening two sectors.

But the Mercedes driver ran too wide exiting the final corner and lost over 0.2s to Verstappen, with the time soon being deleted in any case for violating track limits at that point.

Bottas therefore stayed fourth in the order, the Finn running close to several other cars during the later long-running, with Alfa Romeo’s Antonio Giovinazzi (who finished ninth) questioning why the Mercedes was pulling across on the long run up the hill to Turn 3 at one stage in the final minutes.

Yuki Tsuonda backed up AlphaTauri’s strong start with fifth on a 1m06.397s, the rookie finishing ahead of Fernando Alonso – who lost several times running too wide through the final corners on the medium and soft tyres – and Esteban Ocon. 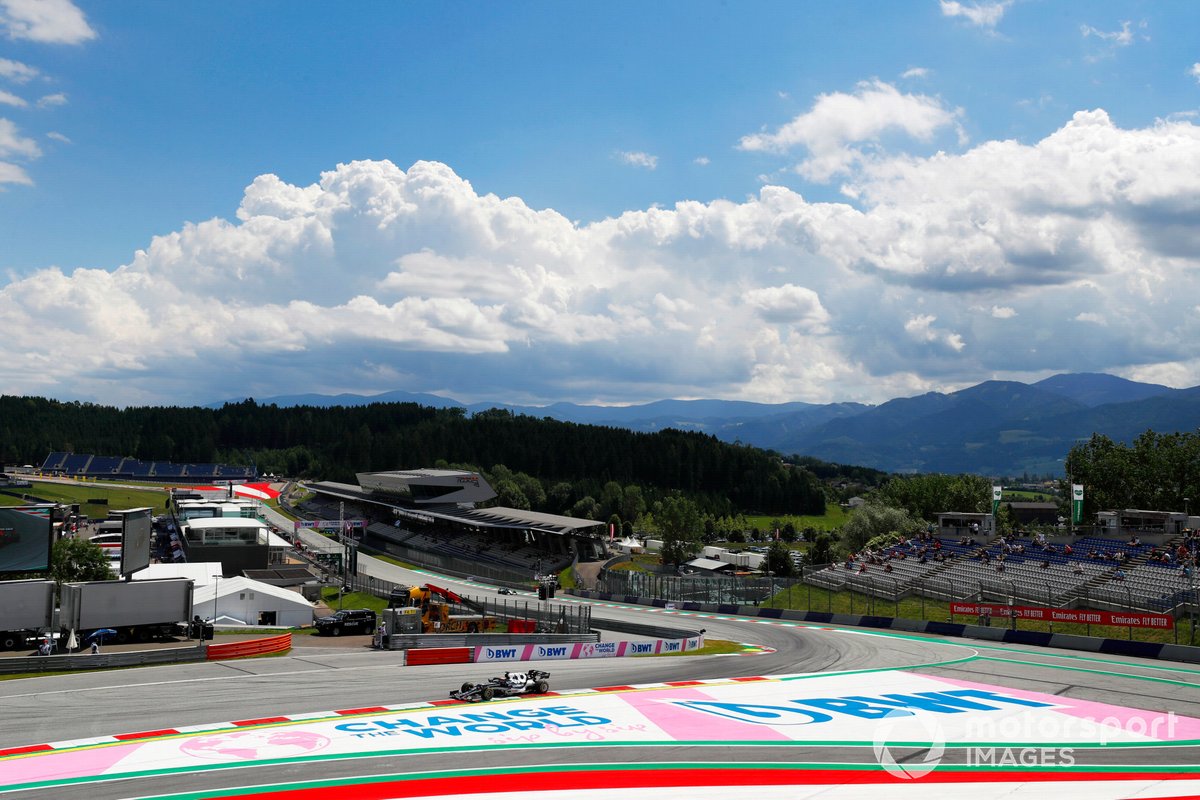 Lance Stroll took eighth for Aston Martin ahead of Giovinazzi, with Charles Leclerc rounding out the top 10 for Ferrari.

The Scuderia’s drivers both had moments at Turn 1, with Leclerc saving a big snap of oversteer after he climbed over the large yellow kerb in the runoff on the exit in the early stages, while team-mate Carlos Sainz Jr ended his time on the mediums just before 30 minutes had been completed with a spin at this point.

Sainz lost the rear of his SF21 as he got onto the big kerb at the exit of Turn 1 and his car looped around to the left and spun to the inside of the track – briefly blocking the pit exit, which forced Bottas to stop and wait for the Ferrari to turnaround as he was leaving the pits when Sainz spun ahead.

At the rear of the field, Robert Kubica – standing in for Kimi Raikkonen during FP1 at Alfa – split the Haas drivers, with Mick Schumacher taking 18th ahead of Kubica and Nikita Mazepin.

All three of the trio at the foot of the times had moments at the tight Turn 3, uphill right-hander in the opening minutes of the session, with Kubica spinning Raikkonen’s car at slow speed as he ran the hard tyres for the initial laps.