Max Verstappen explained how his hand got stuck between the steering wheel and his knee during Formula 1 qualifying for the Abu Dhabi Grand Prix, ruining an early Q1 lap.

Verstappen scored his third pole position in F1 in the final qualifying session of the 2020 season on Saturday at the Yas Marina Circuit, edging out the Mercedes pair of Valtteri Bottas and Lewis Hamilton.

But Verstappen had a brief scare in Q1 when he ran wide at the Turn 6 hairpin and was left trying to catch the car with one hand after his left hand became stuck in the cockpit.

He was quick to inform his Red Bull team of what caused the error, but safely made it through to the second stage of qualifying after calling it a “tricky” start.

“It must have been something unfortunate,” Verstappen explained.

“I got stuck, I think it was between the wheel and my knee. It never happened to me before.

“I literally was steering towards the wall. It’s just an unfortunate action.”

Verstappen did not feel fully confident during his medium tyre run in Q2, but was glad for how qualifying ended with his charge to pole position.

It marked only the second non-Mercedes pole of the year, following Lance Stroll’s breakthrough for Racing Point in Turkey, and Verstappen’s first since last year’s Brazilian Grand Prix.

“The whole year, we were closing in a little bit, and I missed out a few times,” Verstappen said.

“But finally to at least sit here once after the dominance [Mercedes] had throughout the year is very nice for us and for the whole team as well. 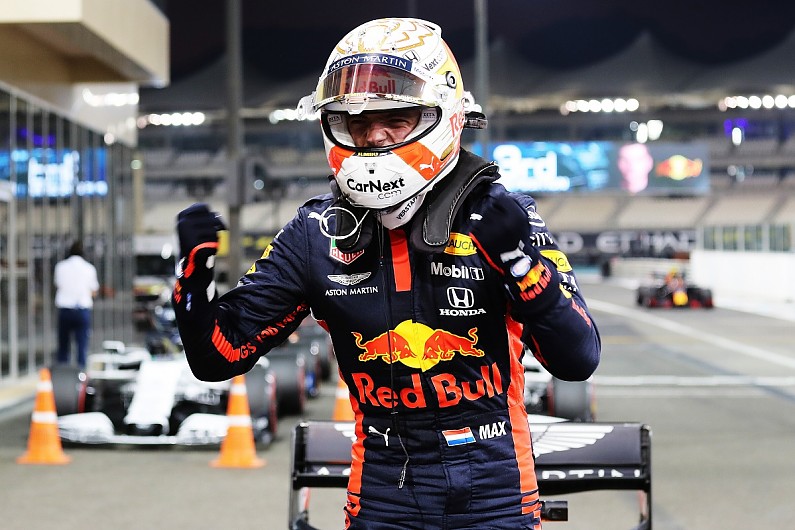 “It’s been a very long season in a short period of time, a lot of races. I think everyone, they want the break, but to have the pole position here is good motivation for everyone in the team to try and finish it off tomorrow.”

Asked how confident he was of Red Bull’s race pace in Abu Dhabi, Verstappen felt unsure given the clouded picture from FP2 after a long red flag caused by the fire on Kimi Raikkonen’s Alfa Romeo.

“I will have a look at what we can do, but I think not a lot of people had a proper long run because of the red flag we had,” Verstappen said.

“So it will be interesting tomorrow. I’ll do my best.

“It seems like our top speed this weekend is not too bad. That’s always nice.

“For sure Valtteri and Lewis, they will be very close, and it will be a good battle hopefully.”