Despite missing the first Aragon round due to a COVID-19-enforced quarantine, Arbolino is now just 11 points adrift of Arenas after claiming his first win of the season, while their other main rival Honda Team Asia’s Ai Ogura was eighth.

KTM Ajo’s Kaito Toba grabbed the holeshot from second on the grid, though team-mate Raul Fernandez found his way into the lead at Turn 8 and immediately pulled the pin.

Just as he did on his way to victory last weekend, Fernandez immediately opened up a gap of a second, with his lead standing at 1.5s by the fourth tour.

Consistent pace would allow Fernandez’s lead to open up to two seconds at one stage, with it generally hovering around 1.6s to 1.8s.

However, the second-placed battle headed by Arbolino and EG 0,0 Honda’s Sergio Garcia started to reel Fernandez in by lap 16, with the KTM rider’s advantage down to a second.

Arbolino and Garcia gapped the group behind of championship leader Arenas, Deniz Oncu on the Tech3 KTM and CIP poleman Darryn Binder and had wiped out Fernadez’s lead by lap 18.

Fernandez continued to hold his lead, while last year’s Valencia GP winner Garcia found a way through into second on Arbolino for second. 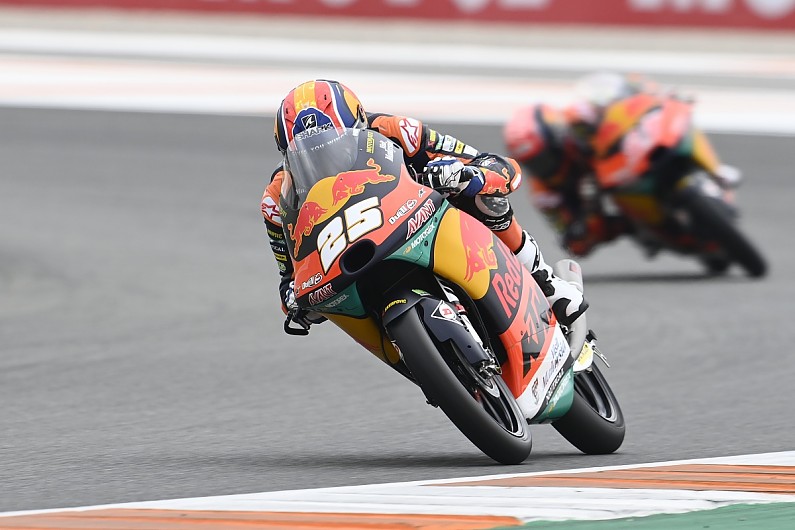 Arbolino carved up the inside of Garcia at the final corner with four tours to go to reclaim second, while behind Arenas was holding firm in an important fourth.

Arbolino then used the power of his Honda to blast past Fernandez into the first corner with two laps to go.

Fernandez and Garcia engaged over second place across the final lap, giving Arbolino a buffer of 1.1s to get to the chequered flag in front.

Garcia got the better of Fernandez for his second podium of the season, while Arenas fended off Binder in fourth on the final lap to open his championship lead over Ogura to seven.

Oncu completed the top six ahead of VR46’s Andrea Migno, while Ogura beat Leopard’s Jaume Masia by 0.012s for eighth.

Jeremy Alcoba completed the top 10 on the sole Gresini Honda at the chequered flag, after team-mate Gabriel Rodrigo crashed out with Max Racing’s Alonso Lopez on lap nine.

Masia’s ninth ended his title hopes for 2020, while an early fall for VR46’s Celestino Vietti also ruled him out of title contention.

Arenas, Ogura and Arbolino will battle for the championship next weekend at the Portugal finale covered by just 11 points.