Roland Dane says Triple Eight has a plan to replace record-breaking Supercars driver Jamie Whincup in 2022, but has also warned that plan could easily change over the coming year.

Whincup will end a two-decade Supercars driving career, that yielded a record 122 wins and seven titles so far, at the end of the current campaign as he replaces Dane as T8’s team principal.

That will open up a full-time driving spot at the powerhouse squad for the first time since 2016, when Shane van Gisbergen was signed alongside Whincup and Craig Lowndes as part of a temporary move to three cars.

With Whincup’s transition a long-held plan by both team and driver, Dane says there’s a simultaneous plan in terms of who will replace Whincup in the #88 entry.

However he’s keeping his cards close to his chest for now.

“I’ve always got a plan,” said Dane. “But there are two aspects to that. Firstly, it’s a plan the I’m not necessarily going to share right now. And secondly it’s a plan that’s flexible.

“I can honestly tell you we haven’t made a decision. But I’ve never been as popular as the last couple of hours, with people telling me that their contracts don’t really mean anything.

“We’ll be looking and following our plan carefully this year, to make sure that we tick the same boxes that we’ve tried to tick in the past, and make sure that the team is as able as possible to have success.

“That’s our primary motivation at all levels. I can’t be more open at the moment, because it’s an ongoing situation. But I can tell you that nothing is locked in.” 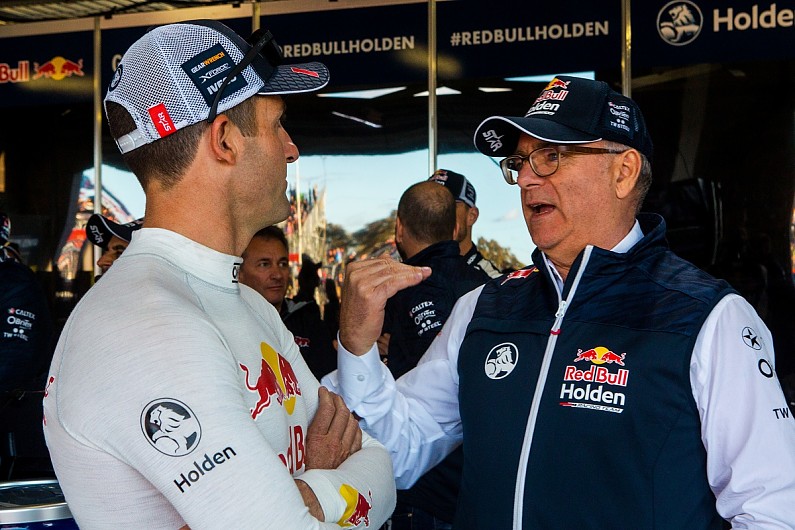 According to Dane its not just established front-runners that are on the list of potential candidates.

He says part of the flexible plan is to keep an eye on what’s happening overseas, while an unproven young driver – much like Whincup was when he was signed by T8 at the end of 2005 – is also not out of the question.

That leaves the door open for T8’s Super2 drivers Broc Feeney and Angelo Mouzouris to join the conversation.

“Unfortunately borders aren’t as open as we’d like, but I’ve always thought that Australia and New Zealand don’t have an exclusive on providing good Supercars drivers.

“There’s also the appeal of young talent, like Jamie was back in the day. Just because we’re a bigger team than we were in 2006 with a huge track record now, it doesn’t mean that we have to have someone come into the team that’s already a championship or race winner.

“We might choose to do that, but we don’t have to.”

Whincup, meanwhile, will play an active role in appointing his replacement.

“It’s a big decision for the team,” said Whincup.

“I guess with my expertise, I know a good driver when I see one. I’ll certainly be giving that feedback back to [Dane] and the rest of the board on who I think will be the best person to drive the #88 car.

“In the meantime, I’m just trying to make sure the #88 car is the most appealing car to drive for any driver come [the end] of this year.

“We’ll be working through that in the next three to six months.”