Toyota has promised a “fair fight” between its two car crews as they bid for the World Endurance Championship title at this weekend’s winner-takes-all finale in Bahrain.

The drivers of the #8 and #7 Toyota TS050 HYBRIDs, who go into the last round of the 2019/20 WEC separated by seven points, will not be compromised by team strategy, according to Toyota Gazoo Racing Europe technical director Pascal Vasselon.

He explained that this will be possible because of the absence of any opposition to Toyota in LMP1 for Saturday’s eight-hour race.

“It is the first time we have had no direct competition, so that means we have different objectives: the target of the team is to provide two very reliable cars and not to interfere in the race,” said Vasselon.

“We will let each car race its own race and optimise its strategy — definitely we want a fair fight without any interference from the team.

“What we have changed for this race is that we will not ask a car to adopt a certain strategy or tyre choice in order to prioritise the team result.”

But Vasselon stressed that Toyota’s rules of engagement demanding the slower car has to cede position if the two TS050s are together on track and the freezing of the order at the last pitstop remain in force.

The #8 Toyota driven by Sebastien Buemi, Kazuki Nakajma and Brendon Hartley will have to overcome a 0.54s performance deficit in Bahrain under the system of success handicaps introduced for LMP1 ahead of the 2019/20 season.

PLUS: The 10 greatest LMP1 races ranked

Nakajima told Autosport that it will be hard to make up for the penalty over the course of the WEC finale.

“We know it is going to be difficult, but we will do our best,” he said. 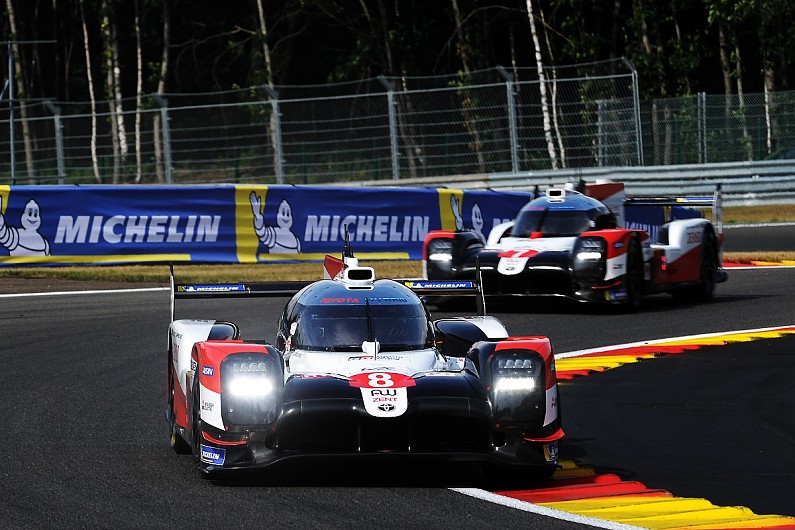 The extra points on offer because Bahrain is an eight-hour race mean that Kamui Kobayashi, Mike Conway and Jose Maria Lopez in the #7 car will overhaul their team-mates and take the title should they take victory.

The winner gets 38 points rather than the 25 for a six-hour race and the second-placed car 27 rather than 18.

The point for pole position will have no bearing on the outcome of the title battle should the Toyotas finish one-two.

Toyota is racing without LMP1 opposition in Bahrain after Rebellion Racing withdrew its solo entry in the wake of the Le Mans 24 Hours in September.

The Team LNT Ginetta factory squad has not competed in the 2019/20 WEC this calendar year and the ByKolles squad only raced at Le Mans and the Spa round preceding it by way of preparation.