Lance Stroll says a mistake he made in running wide after leaving the pits cost him a shot of victory in Formula 1’s Sakhir Grand Prix.

The Canadian had been running ahead of Esteban Ocon and teammate Sergio Perez when he left the pits following a change of tyres for the run to the flag.

But he ran slightly wide under braking for Turn 1 as he came out, and that allowed Ocon to get past him.

Then, being unable to find a way past his Renault rival, he got held up and Perez was able to close up on the pair of them.

As the trio battled for position, Stroll made a mistake and braked deep at Turn 4, allowing Perez through for his eventual run to victory.

Although Stroll was able to come home in third place, for his second podium finish of the season, he could not hide his disappointment afterwards after missing out on a clear shot at the win.

“A part of me is a little bit disappointed that I think I could have won the race,” he said. 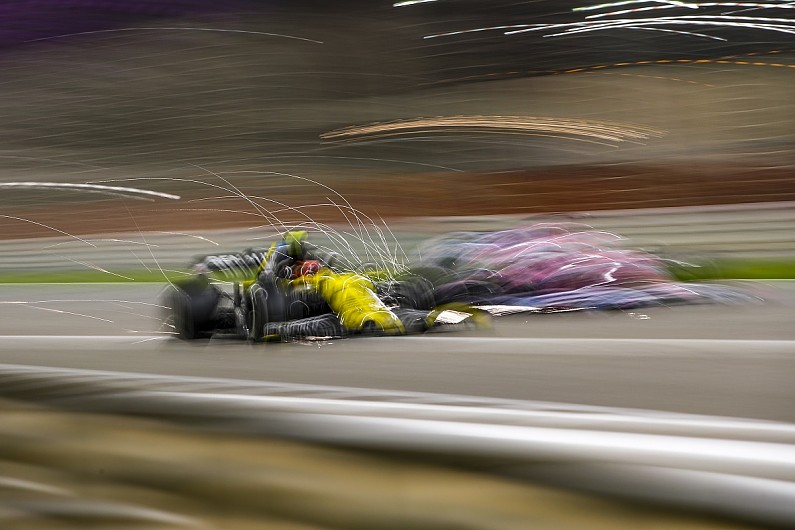 “I went a little bit deep on my pit exit after my pitstop, and Esteban managed to get by me. Then I just didn’t have the pace.

“I locked up and Sergio went by, but I just didn’t really have the pace to overtake Esteban. I got held up there a little bit. But all in all very happy for the team.

“I mean it’s an unbelievable result and first and third is exactly what we needed this weekend for the championship.”

Asked about the error he made when Perez was able to get past, Stroll said: “I think being in the fight with Esteban and Sergio, I was late on the DRS actually out of three.

“Sergio got a good run on me and then I was defending. I just miscalculated it, braked a little bit late and locked up.

“It one of those things but I am super happy for Sergio.

“He’s got a couple of races left for the team. He has been up there for such a long time waiting for the win and it came this weekend, so I am really happy for him.”