Ricciardo first introduced the celebration to F1 in 2016 after seeing fellow Australian Jack Miller do it when he won that year’s MotoGP Dutch TT, but he forgot to perform it when he took third place at the Nurburgring three weeks ago.

Ricciardo was about to take a drink from his right boot when Hamilton volunteered to join in and the Australian duly removed his other boot, offering it to Hamilton.

Race winner Hamilton admitted he is not a fan of champagne and confirmed that it “tastes worse” when drunk from his rival’s racing boot.

“I mean, I don’t really like champagne as it is, but it definitely tastes worse.

“But what’s positive is that Daniel’s mum thinks I was a good sport, so I’m grateful for that. I think Daniel had said that I’d once said never, that I would never do it. So there’s a lesson – never say never. It was a good moment.”

Ricciardo made it clear he had enjoyed Hamilton’s change of heart having been “adamant” he would eventually be able to change the world champion’s mind on taking part in the celebration. 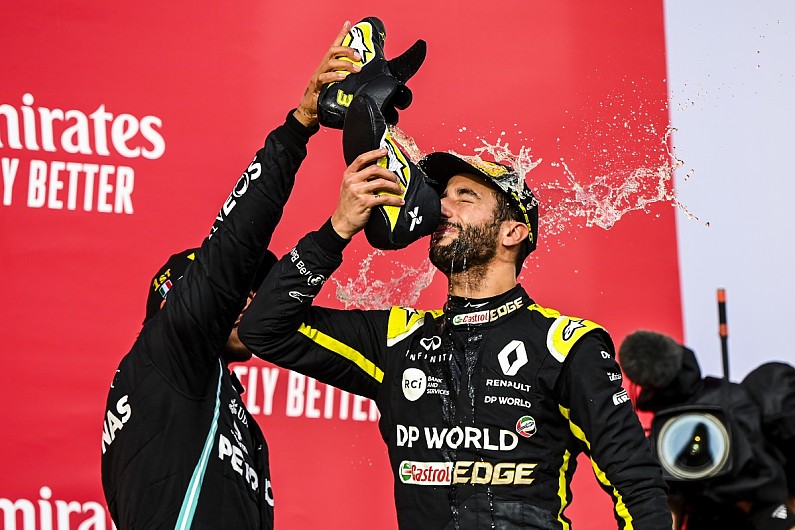 “I took my right shoe off, poured it, and was about to salute the mechanics,” he said.

“”And I heard Mr Hamilton asking me to take my left shoe off. He also drank out of my shoe today. So we shared one today, and it was majestic.

“And fun fact for everyone, I think it was three years ago on the podium he said he will never, ever drink out of my shoe, and in 2020 strange things are happening.

“I was very adamant that I would get him to do it one day, and here we go. So I didn’t forget, and I’m very happy.

“Champagne is colder these days, I don’t know if it’s because we’re approaching winter and it’s cooler outside, but it does make the shoe experience slightly more tolerable.”

Asked if drinking champagne from another driver’s shoe was potentially a breach of COVID-19 protocols, Formula 1 race director Michael Masi admitted that no such rule had yet been written.

He noted: “I would have to say that it’s not something that I’ve studied or considered in any great detail, about sharing a shoey, as it’s commonly referred to.”