Jamie Whincup is predicting a wild battle for the 2021 Supercars title that could feature as many as 15 drivers.

Speaking during the launch of Triple Eight’s new livery, the seven-time series champion moved to allay fears that this year could be a T8 cakewalk now that Penske has pulled out and Scott McLaughlin has moved to IndyCar.

He said he’s expecting the opposite, Whincup predicting the powerhouse squad will have its hands full in what could be a titanic battle for the title.

“While there’s so much new and so much fresh [this season], there’s still one thing in common – that’s the to go out there and try and beat your mates to the finish line,” said Whincup.

“The competition this year, I’m predicting it will be tighter again. It’s going to be a massive battle for this year’s championship. There could be 10 or 15 guys eligible for the win this year.

“Fingers crossed both Triple Eight Race Engineering cars are battling it out.”

Both Whincup and T8 team-mate Shane van Gisbergen will head into the 2021 season as joint favourites for the title, the stiffest competition likely to come from the likes of new Dick Johnson Racing pair Will Davison and Anton De Pasquale, Tickford’s Cam Waters and Walkinshaw Andretti United’s Chaz Mostert.

There are other proven race winners that could factor as well, such as Nick Percat at Brad Jones Racing, James Courtney at Tickford, David Reynolds at Kelly Grove Racing and Team 18 pair Mark Winterbottom and Scott Pye. 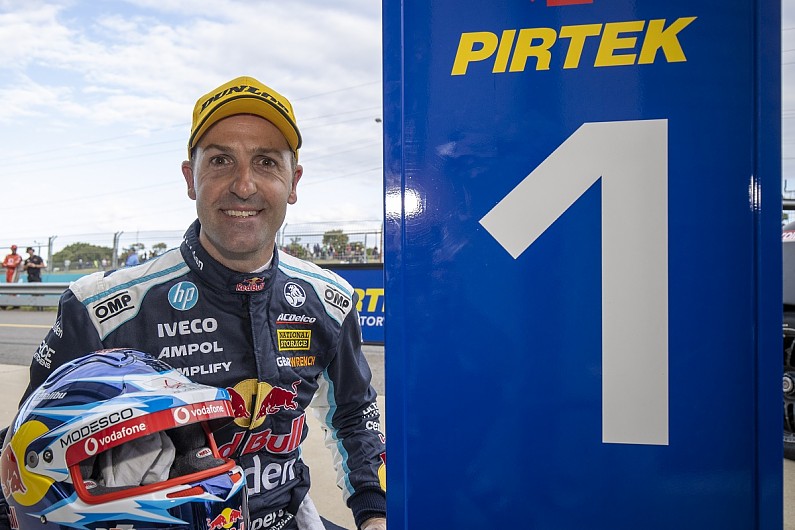 While not expecting to have it easy, Whincup says he’s confident his team has done the best job it can in its preparation for the new season.

“All I’ll say is that we’ve prepared well, we’re in a good place ready for Round 1.”

Whincup also hinted that a track debut for T8’s Gen3-spec Camaro may not to be too far away.

“In the background we’ve got Gen3 and the Camaro, which we’re so pumped about,” he said.

“We should have a Camaro on the track shortly, testing, developing, getting ready for 2022. It’s going to be an exciting year.”

Triple Eight will run its current Holden package for the first time this year at the Queensland Raceway pre-season test on February 12.

It’s not yet clear if van Gisbergen will be able to take part, the Kiwi still stuck in his homeland following an unexpected change to the border arrangement between Australia and New Zealand earlier this week.

Even if he misses the test and needs to undergo quarantine, van Gisbergen should be able to get back in time for the season-opener at Mount Panorama on February 26-28.