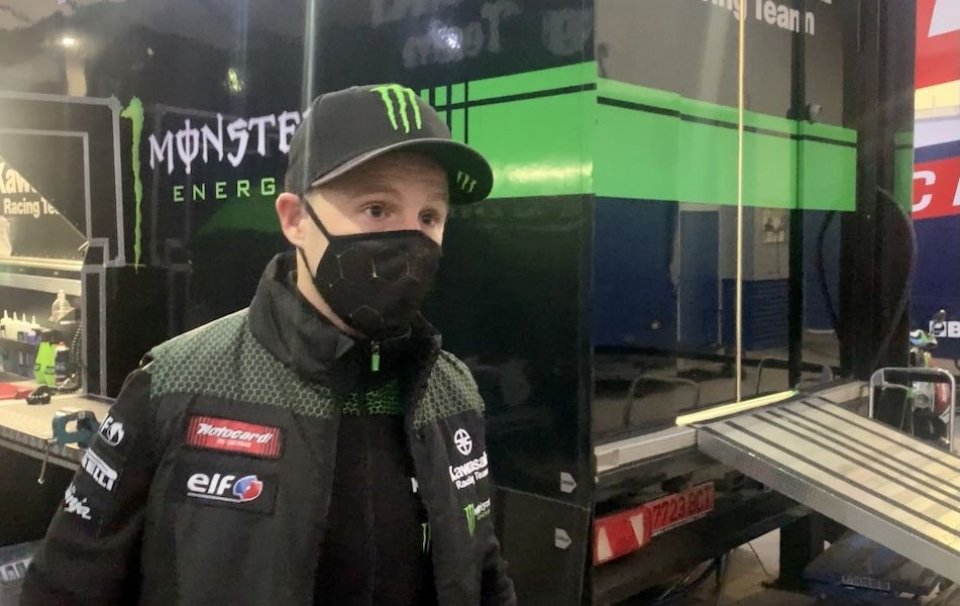 He wasn’t the best, but he was certainly the most observed. Jonathan Rea, six-time SBK World Champion, began his pursuit of his seventh consecutive title in the category in Jerez today. Kawasaki booked the Andalusian track for two days of private testing – in which Honda and Yamaha also took part – to get Rea and Lowes back on track.

As mentioned, Jonathan was not the best in the standings, since Garrett Gerloff – with the R1 prepared by the GRT team – did better than he did, returning to the SBK after his experience as a replacement for Valentino Rossi on Friday in the European GP.

“Garrett kept a good pace today, and his lap with the race tires was really fast. He had already shown us something good at the end of the season and is doing a great job with Yamaha.”

Speaking of Kawasaki, multiple sources confirm that  you and Lowes would have ridden with the new engine today. You’ve been waiting for the new ZX-10RR for years. When will we see you on the track with the new bike?

“This new bike that everyone is talking about is a mystery. I tried a new swingarm today, and we also changed something in the engine that gives different sensations. I test what Kawasaki offers me. We have a list of things to test, and we’re working on that. As always, there were some positive and negative points, but I think today’s bike is similar to the one of the season that just ended.”

In one of your first rides this morning, we saw you had stopped on the track. What happened?

“I felt oil under my foot this morning, so I stopped. There was no engine problem because, a few minutes later, I went out on the track with the same bike. It wasn’t a big problem.”

Ducati has chosen not to come here to Jerez. Are you surprised with this  decision?

“Last week, I received an email with the entry list of these tests, and I was really surprised when I read that they wouldn’t be here. I didn’t think it was true. They won’t even come to Aragon. Only we’ll  be there. I’m really proud that my team pushes to do so many tests, also because we missed some this year.”

Still speaking about Ducati, it looks like Chaz Davies – who seemed destined for the GO Eleven team – could be going to the MotoGP with Aprilia. What do you think about that?

“Better talk about it when it’s confirmed. Ask me when it’s official.”

You haven’t ridden your bike in a month. It’s not a great moment. Did you still have some kinks to work out?

“That’s true. It hasn’t been long, but I still feel I’ve lost something. It’s a similar sensation to the one I had experienced in the Misano tests, right after the lockdown where it went really badly. It’s nice to be able to test, because you learn new things each time. Next week, we’ll also be riding in Aragon.”

What’s the work schedule for tomorrow?

“Tomorrow I’ll have to push more on the rear. I’m quite fast here. I remember having done a 37.5 a few years ago, but Jerez is a strange track. Sometimes it goes well, sometimes badly. I hope to get along well with the character of the engine we’re testing tomorrow.”