Carlos Sainz Jr says he endured 60 laps of “suffering” in the Eifel Grand Prix, as he believes McLaren’s new aero package cost him a shot of a podium finish.

Following the cancellation of Friday practice, McLaren elected to split strategies across its cars, with Sainz running the latest upgrades and team-mate Lando Norris using the old spec.

But Sainz struggled throughout the weekend to get comfortable with the handling characteristics of the new aero, and believes that he missed out on the shot of a top three finish because of it.

“It’s a fifth place that tastes good because it’s 10 points, but when you’re suffering in the race for 60 laps, you end up a little out of place,” Sainz told Spanish TV station Movistar.

“I’m not very happy, actually. It is a fifth place that tastes little when you see [Daniel] Ricciardo and [Sergio] Perez ahead [fighting for] on the podium, and that we have missed an opportunity to fight for that podium.

“With the car I had today I couldn’t fight for the podium, but maybe with the one I had two races ago, maybe I could.” 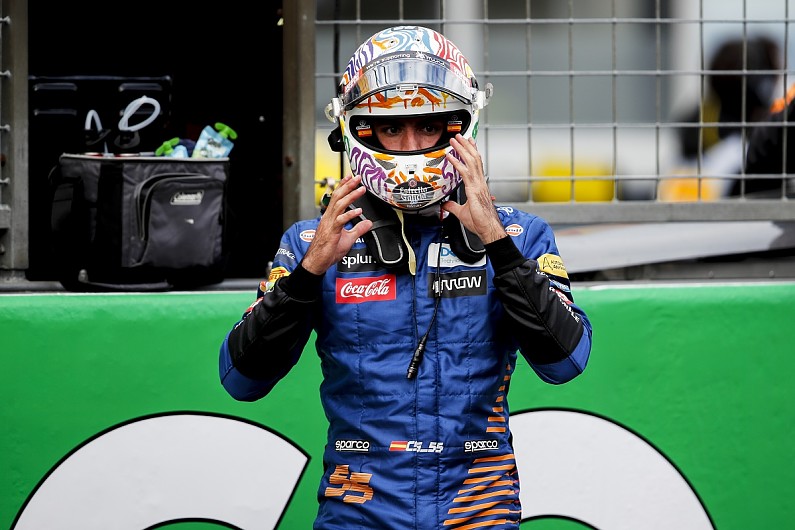 Sainz said that the lack of feel with the new aero package triggered excessive tyre wear, and that McLaren needed to go through a lot of analysis to understand what the best way forward is.

“We had much more graining than the rest, the car goes a lot from the nose and that costs you more degradation,” he said.

“But I hope this will serve to get 60 laps of analysis, data and go back to the factory to investigate what is in this new package that does not just give me a good feeling and does not give us the sensations and performance we expected”.

With Norris having to retire from the race because of an engine problem, McLaren has slipped back to fourth in the constructors’ championship behind Racing Point.

Sainz admitted that with Renault also breathing down its neck, the team needed to be mindful about bringing home more consistent points.

“We will have to investigate what has happened with Lando, because they are some points that were important for the championship,” added Sainz.

“Between the engine failure and the little we have raced this weekend, especially with my car, there is homework to do and we must overcome.”

Second place “best that I could do” in Bahrain GP qualifying