Williams driver George Russell believes that Bahrain’s high-speed outer circuit will be “bonkers” in a Formula 1 car – while McLaren’s Lando Norris has likened its flat-out nature to Thruxton.

The short version of the venue will be used for the Sakhir GP on 6 December, following next weekend’s Bahrain GP on the standard layout.

The outer track cuts out the twisting infield with a connecting section, and it will see sub-60 second lap times in F1 for the first time since the original short Dijon format was used for the 1974 French GP.

In recent weeks drivers have sampled it on factory simulators as they prepare for the final run of three back-to-back races that ends the 2020 season.

“It is definitely going to be bonkers, that’s for sure,” said Russell. “I think it’s exciting because the lap times are going to be so close.

“I reckon everybody will probably be within a second in qualifying, which means if you make one small mistake, you can be losing loads of positions on Saturday.

“I think it’s going to be giving absolutely everything you’ve got, making sure you nail the lap, because there more than anywhere if you do make a mistake, you don’t have enough corners to make that lap time back.

“It will probably be a bit of a mess on Saturday, because everyone will be looking for a slipstream.

“There’s probably not enough space to fit 20 cars on there. And the racing is going to be so pretty wacky. So that’ll be exciting.” 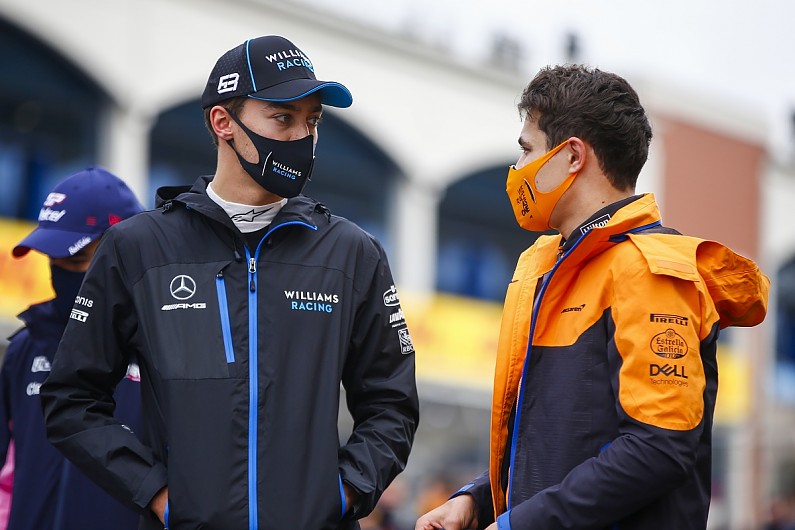 “The only one it kind of reminds me of in a little bit of a way is Thruxton, just because it’s not many corners, they’re small, sharp corners, the ones we have in Bahrain.

“But at the same time it’s a small, oval kind of shaped track, and very short as well. It should provide a lot of racing.”

McLaren’s Carlos Sainz Jr believes that choosing the optimum level of downforce won’t be easy, given the need to trade off between the winding upper part of the circuit, the long straights and the low-speed corners.

“I think it’s going to be a challenge to find the right compromise on the set-up,” said the Spaniard.

“Because it’s not a typical track in F1. You never go to this kind of circuit with only long straights and two or three corners to really drive around.

“It’s going to be a bit of an experiment really for F1. I think it will generate some different kind of racing. There will be a lot of talk regarding rear wings, what downforce level you run, and all of that.

“Obviously it has our input as drivers, but it’s more simulation work, more engineering work that the team needs to figure out how to arrive there as well prepared as possible.

“It looks fun and I’m up for a different kind of layout, a different circuit to experiment with.”