George Russell expects his Mercedes Formula 1 debut in the Sakhir Grand Prix to be “quite a fatiguing race” considering his struggles fitting into the cockpit of Lewis Hamilton’s car.

Russell is having to squeeze into the W11 that has been optimised around Hamilton, who is four inches shorter, and is wearing race boots that are one size too small to help the situation.

He is also having issues with the clutch paddles on the Mercedes steering wheel being too small for his hands – although the team is understood to have made some modifications to help with this.

After qualifying second behind temporary team-mate Valtteri Bottas for the Sakhir GP, Russell explained how the cockpit issues might impact him during the race.

“I’m very bruised and sore and it’s going to be quite a fatiguing race if you’re not comfortable in the car,” he said.

“I had ice on my shoulders last night to reduce some swelling and what have you, and knees [and] toes.”

When asked about his mindset ahead of the race, Russell said he was feeling “very relaxed, to be honest”.

“When I was waiting for confirmation if I’d got this drive, it was incredibly anxious but as soon as I got the confirmation, I just saw it as a great opportunity, so I was pretty chilled,” he added. 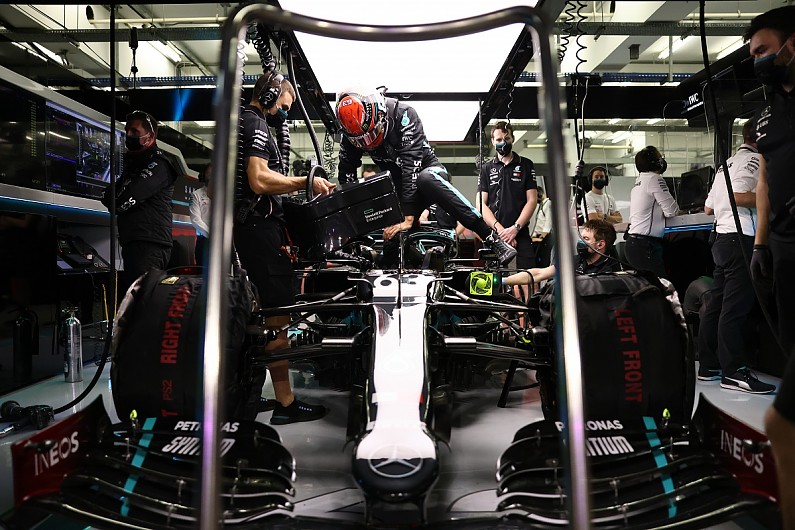 “Everyone at Mercedes – Toto [Wolff] and James [Allison] – they just said: ‘Go out and enjoy it – there’s zero expectation from you. If Lewis were to jump in a Williams, let’s say, it would be difficult, so we’re not expecting anything from you, and if you qualify first two rows, top five, top six – fine. You can still get a podium from there’.

Russell finished just 0.026s behind Bottas in qualifying and said the difference between them was down to problems he’d been having keeping speed high at the exit of Turn 1.

“The main thing, I was just struggling with a lot of understeer at the apex, which meant when I picked up the power, I was just getting a snap of oversteer,” Russell explained.

“I think the Mercedes just has so much more grip and so much more front end on the entry phase that could allow me to carry a bit more speed, but it was difficult.

“It’s just a very different way to drive the car.”