Yamaha boss Lin Jarvis says Valentino Rossi will be a “very important part” in the development of the 2021 MotoGP bike despite his switch to Petronas SRT.

After 15 seasons together, Rossi’s time at the factory Yamaha squad came to an end at the conclusion of the 2020 campaign, with the nine-times grand prix world champion remaining a factory-contracted rider at SRT next year on current-spec machinery.

Though Jarvis admits Fabio Quartararo and Maverick Vinales will lead some of the development at the factory squad, he does not believe Rossi “moving next door” will change his role much from what it has been previously at Yamaha.

“So, it will be a change, there’s no doubt because moving next door as such will be different.

“But on the other side, it will not be different because Valentino will get full factory support next year. 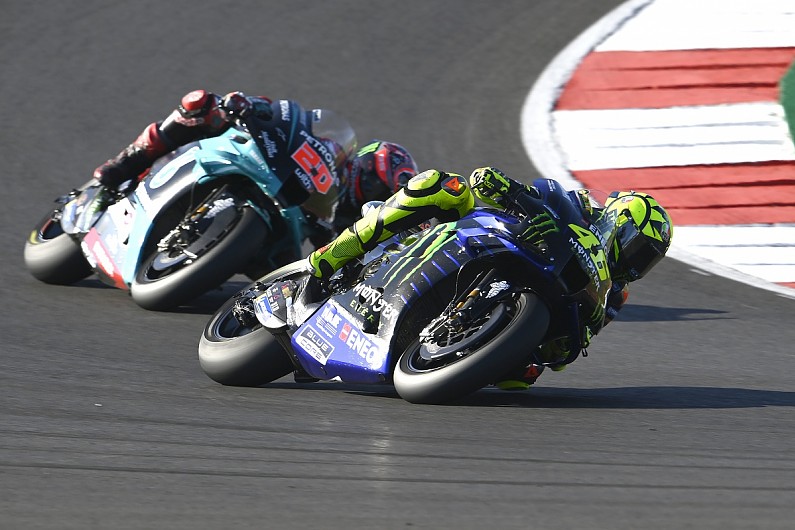 “He’ll be riding a factory bike with the same spec as the factory riders. It is true that some of the development will be led more by the factory team, but Valentino is a very important part of our data gathering.

“Having more riders on the track is important and there’s no question our engineers will be looking at the data of Fabio, Maverick and Valentino to develop and further progress the factory bike.

“But also, we get some interesting information as well from having Franky [Morbidelli] out there [on the older bike].

“So, I think that it will be not a huge change, it will not be a deficit in any case ,and it will not change very much how we develop the bike.”

Rossi was critical of Yamaha’s engineering staff in Japan during the Portuguese Grand Prix finale last month, claiming they listen to rider feedback but still “do what they want” regardless.

The Italian admitted he was also unsure as to how much input he was actually having in bike development.

Yamaha’s 2020 campaign was a mixed affair, with its combined seven victories juxtaposed with wild inconsistency from those on the 2020 M1.

In the end, Morbidelli on the older ‘A-spec’ M1 was top Yamaha in the championship in second having scored three wins – equal with SRT team-mate and long-time standings leader Quartararo, who slid to eighth in the rankings.