Alex Rins admits he “didn’t even think to finish third” in the MotoGP standings as he slumped to 15th in the Portuguese Grand Prix due to an incorrect tyre choice.

The Suzuki rider came into the 2020 finale just four points down on Petronas SRT’s Franco Morbidelli in the battle for runner-up spot in the standings.

But Rins ended up walking away with third as a podium for Morbidelli netted him second in the standings.

The Suzuki rider was one of just four riders to go for the asymmetric hard rear tyre, while the rest went with the harder symmetric option, but he quickly found grip on the left-hand side of the rubber fading.

“I am very happy with how the championship had gone after the ups and downs at the beginning of the year,” Rins said.

“It was a shame not to have the opportunity to fight for the constructors’ title and for the runner-up [in the riders’ table] in the last race for not choosing the rear tyre well.

“At the beginning I was going well, but after a few laps passed I couldn’t drive in the left-hand corners.

“I did not even think to finish third in the world championship because of how the race went. 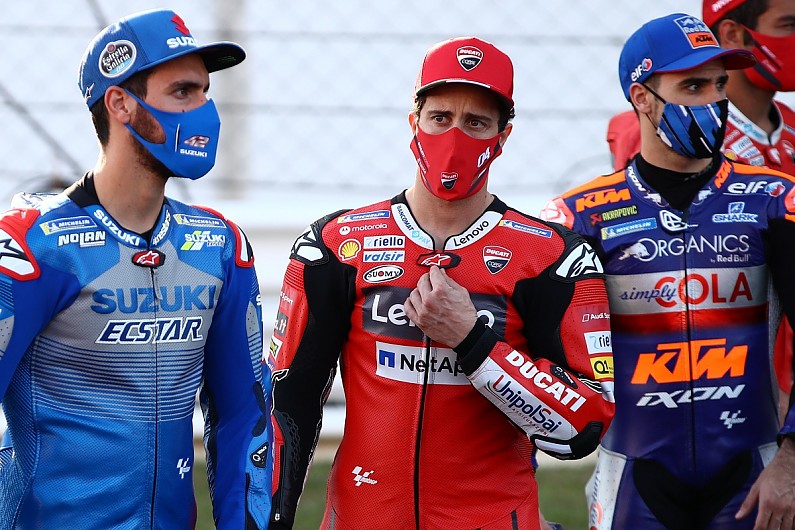 “When I saw that I was losing position and that Pol [Espargaro] was ahead, I thought I was going to finish fourth or fifth.

“So, after how the race went, being third was great news that I found out when I got to the box.”

Rins, who was one of nine riders to win a grand prix in 2020, rates his season an 8.5 out of 10 and says the “bad times” he experienced early in the year with his shoulder injury have “made me much stronger”.

“I keep the effort that I put in after the injury,” he said. “I have learned to fight and the bad times we have experienced in that part of the championship have made me much stronger.

“What I would change is some of the crashes we suffered at Le Mans and Austria , it was the most painful.

“Personally, I would put an 8.5 for the season, we have managed to improve the final result, which was the fourth last year.

“I don’t give myself a 10 because that would have been the runner-up, and we haven’t achieved it.”