Daniel Ricciardo says Fernando Alonso’s eye-opening run in the Renault R25 this weekend should serve as a reminder that Formula 1 cars need to bring back the “wow factor”.

Alonso has caused a buzz over the Abu Dhabi Grand Prix weekend after running some demonstration laps in his 2005 title-winning Renault.

The screaming sound of the V10 engine, allied to the nimbleness of the chassis, has drawn admiration from everyone in F1 – and reopened debate about whether or not the current cars deliver such thrills.

Ricciardo concurs that the R25 is an ‘intimidating’ car, as he suggests there are elements of it that just cannot be matched by the current turbo hybrid V6s.

“I watched the onboard and it was pretty cool,” said Ricciardo.

“I guess anyone thinking Fernando is a little too old, that isn’t the case. I think he only knows one speed that guy and it’s fast! Even the kerbs and that, he wasn’t shy, he wasn’t shy to hustle the equipment.

“I didn’t have a stopwatch, but I know for a fact, he was going much slower than us. But it looked faster because it sounded more impressive – and that’s the V10

The lack of sound of the current turbo hybrid engines has been an ongoing issue since 2014, with the power units being much quieter compared to older V8 and V10s 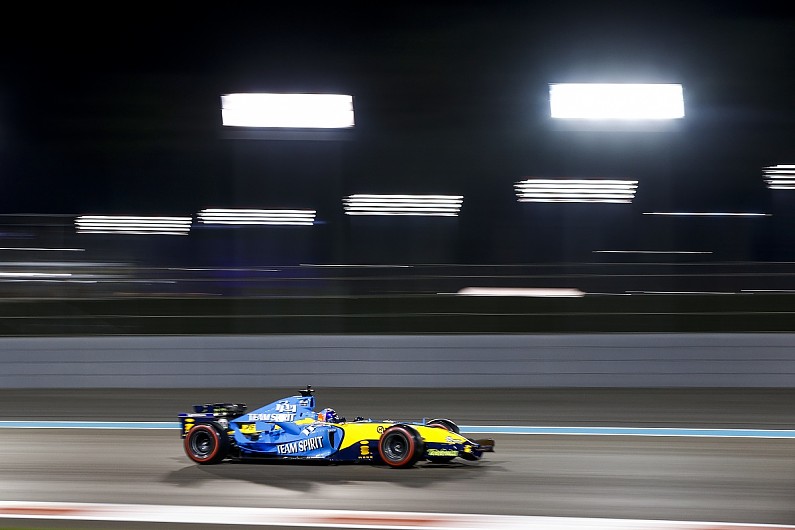 With F1 moving to a new engine formula from 2026 at the latest, there could be an opportunity to change that and make them louder – either through allowing them to rev higher, or by removing the MGU-H.

Asked if he felt that was a must for F1, Ricciardo said: “I think so. Certainly for engagement with fans, and again it’s the wow factor.

“I remember I’ve still got photographic memory of me arriving in Melbourne, Albert Park, as a kid with my dad.

“I remember we got out of the taxi to get our suitcase when we arrived at the hotel, and I could hear the F1 cars from the track.

“The echo came into the city, and I remember I looked at dad, we looked at each other, and we had goosebumps. So there was that wow factor.

“Don’t get me wrong, visually the cars we have now are a bigger wow factor than ever, because they are so fast. But they don’t have that intimidation behind the sound: that roar and that scream.

“It’s like a fighter plane, an F18. If they were electric, they wouldn’t look that cool would they?

“The sound creates atmosphere. If you go to a live concert or festival, it’s the big speakers, it’s the atmosphere and that is a lot of the time, volume. People pay for that. They get excited for that.

“And speaking first hand, my first time [in an F1 car], it was only a V8, but when the mechanic starts it up at the back, and you hear this roar…it’s scary.

“So, I think for the young kids coming in it probably lacks that kind of wow, that scare, initially.”