Daniel Ricciardo says Lewis Hamilton being given one of Michael Schumacher’s old helmets after matching the German’s Formula 1 win record was one of the “coolest” gifts awarded in sport.

It was the latest in a string of achievements for Hamilton, whose victory at this year’s Styrian GP made him only the second driver in F1 history after Jack Brabham to win a race in three different decades.

Immediately after the Eifel GP, Schumacher’s son Mick presented Hamilton with a helmet that the seven-time world champion had used in his final season in 2012.

Renault driver Ricciardo, whose third place at the Nurburgring ended a podium drought dating back to his victory for Red Bull in the 2018 Monaco GP, was full of praise for Hamilton’s achievement and paid tribute to the consistency that has allowed him to win at least one race in each of his 14 seasons to date.

“His career now has been well over a decade in the sport and to keep coming back and to show that level of consistency at the front, that’s not easy,” said Ricciardo.

“I think us up here [on the podium], I think we understand that.

“You can have a package and a car to do it, but it’s doing it every weekend when the lights go out. 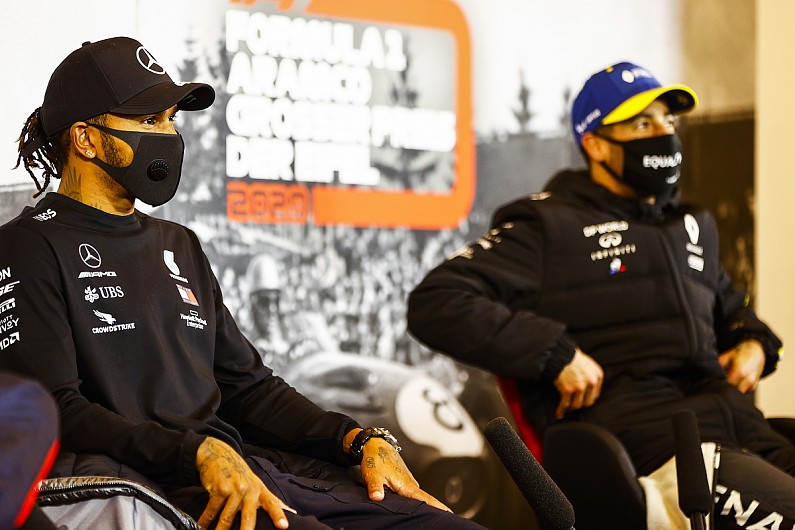 Ricciardo added: “I think also the gift that he received: one of Michael’s helmets, that’s one of the coolest gifts I’ve ever seen in the sport.”

Hamilton said he was “humbled” after receiving the helmet and revealed that it will sit in his lounge alongside another Schumacher helmet he got following a swap with the German at the 2012 Abu Dhabi GP.

“You know his son is such a great bright talent and just a really genuine human being so Michael’s obviously raised a great man in him and I look forward to seeing how his career will look moving forwards.

“But now I have two special helmets from Michael in my small living room.”