Daniel Ricciardo says his Renault team boss Cyril Abiteboul will get a German-themed tattoo, after winning his podium bet at the Eifel Grand Prix.

The Australian placed a wager with Abiteboul earlier this year that if he succeeded in finishing on the podium for Renault this season then they will get matching tattoos.

As part of the deal, Abiteboul is able to choose the size of the tattoo and where it goes, while Ricciardo gets sole say in the design.

After finishing in third place at the Nurburgring on Sunday, Ricciardo said he would now do something linked to where they achieved the first podium together.

“It’s real. It’s going to happen,” said Ricciardo. “We’ll have to do some thinking now, but probably it will be something to do with me, but I think with a German flavour.

“This is obviously the place we did it. A little tip of the hat to something traditional in Germany as well.”

Ricciardo’s podium finish is Renault’s first since it returned to F1 as a works team in 2016.

It also ends a long podium drought for Ricciardo which stretches back to his victory at the 2018 Monaco Grand Prix with Red Bull. 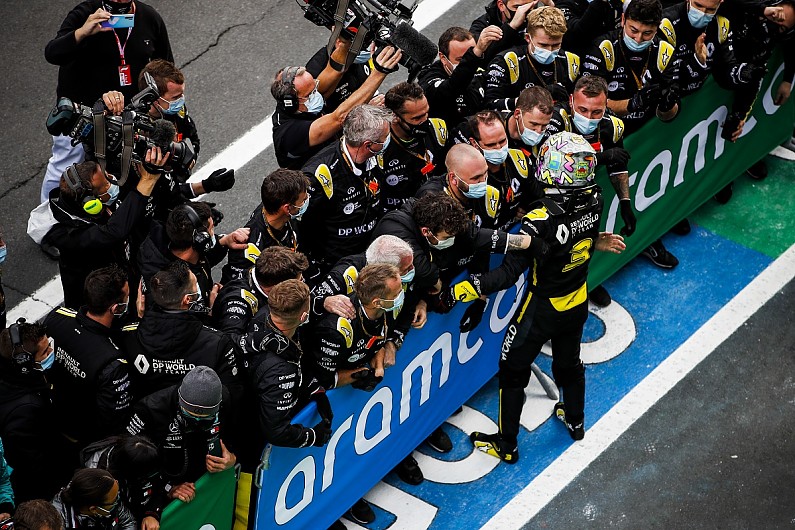 As he shared the celebrations with his team in parc ferme afterwards, Ricciardo said the top three finish felt like an all-new experience.

“Yes, it’s been a while,” he said. “And actually, to be honest, it feels like the first podium all over again. I think it’s been two and a half years or something, and yeah the feeling, it’s really nice, it’s fresh.

“I’m so, so happy and obviously to see everyone as well, we’ve all waited a long time for this. So, yeah, I think everyone’s going to soak it up.”

Ricciardo’s podium finish has closed up the fight for third place in the constructors’ championship, which is hotly contested between the French car manufacturer, McLaren and Racing Point.

Following a tough afternoon for McLaren, Racing Point is now third on 120 points, with McLaren on 116 and Renault just two points further adrift. Autosport 70: When Schumacher and Hakkinen battled in Macau – F3