Jaguar took a dominant 1-2 in the 1990 Daytona 24 Hours as its IMSA GTP rivals crumbled. TOM HOWARD revisits the Big Cats’ triumph, with a little help from Andy Wallace and Martin Brundle

The IMSA SportsCar Championship season gets underway this weekend with the Daytona 24 Hours, featuring 49 cars split across five classes from Daytona Prototype international to GTD.

First held as a three-hour race in 1962 before switching to the 24-hour format that remains today in 1966, the event has become a fixture on the international endurance racing calendar and is highly prized by manufacturers around the world.

That was equally the case in 1990, when Jaguar’s XJR-12 claimed an utterly dominant 1-2 at the height of the IMSA’s GTP era against opposition from Nissan, Toyota and a bevvy of privately entered Porsches.

Jaguar had already conquered Daytona in 1988 with its awesome Tony Southgate-designed XJR-9 driven by Martin Brundle, Raul Boesel, John Nielsen and Jan Lammers taking the victory on the car’s debut.

That proved was the start of a highly successful year in which the car also won the Le Mans 24 Hours with Lammers, Andy Wallace and Johnny Dumfries, and claimed the World Sportscar Championship title with Brundle.

For 1990, the Tom Walkinshaw Racing-run factory Jaguar programme had developed the XJR-12, powered by a normally aspirated V12 engine at Daytona while TWR continued to fine-tune the twin-turbo V6 units that had come on stream midway through 1989. 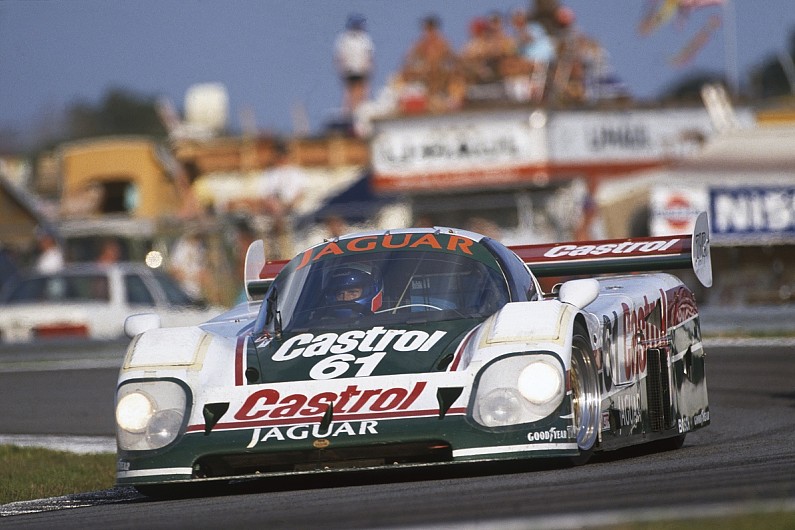 Two Castrol-backed XJR-12Ds (the ‘D’ reflecting the modifications made for Daytona, including modified front suspension which allowed it to run softer tyres) were fielded. The #60 car was entered for Brundle, Nielsen and American Price Cobb, while Lammers, Wallace and then IndyCar part-timer Davy Jones piloted the sister #61 entry.

The Jaguars started ninth and 10th behind their turbo-charged opposition, who had almost a 300 horsepower advantage in qualifying trim, and while Cobb and Jones held position at the start the pole-winning Texaco Havoline Porsche 962 of Bob Wollek led the early stages.

A documentary of the race available to view on Motorsport.tv features narration from Brundle and Wallace, who offer fascinating insights into Daytona’s demands. Brundle states that the event is “easily the most physically demanding race for any driver in the world”, with drivers pulling 2.5G on the famous 18-degree banking and the 13-hour Florida night meaning much of the race was run in the dark.

Wallace added: “The first 24 hour race I did was Le Mans and I thought that was fairly physical, but my first visit to Daytona was 50 percent more so because of the banking and the amount of slow cars you have to pass day and night. On the first banking there is a period of two to three seconds where you just can’t see and are blinded by the sun, and that lasts for two or three hours…”

Walkinshaw had told his drivers to drive to a pace early on before reassessing mid-race, although Wallace claimed, “as a general rule of thumb you drive absolutely flat out without hitting anybody and that is about a good pace, providing you don’t bounce over any kerbs.”

While many of their rivals had written the Jaguars off, reckoning that the V12 monsters wouldn’t see midnight, the XJR-12 pair were in command of the race as night fell and the rate of attrition grew.

Brundle jumped in the leading #60 car around twilight, and despite revealing he was driving it like a Formula 1 car and suffering a spin collecting a tail-ender, he handed the car over in the lead. However, it was soon after that the #61 car took command with Wallace at the helm, the advantage made more comfortable after a slow brake pad stop on the sister entry.

As Gordon Kirby reported in Autosport: “The race essentially was over by the middle of the night with the Jaguars well clear of the remaining Porsche privateers.”

The race was not without incident, as sportscar legend Derek Bell suffered one of the biggest crashes of his career in the Momo-backed Porsche 962 he shared with Giampiero Moretti and Stanley Dickens. The car collapsed on the right rear corner and flipped before landing on its roof, skidding to halt on the tarmac with fuel pouring from the chassis.

Bell, who was lucky to emerge unscathed, recounts: “I just remember sailing through the air and then it just came down so quietly on the road and just skidded on and on and on down the road.

“I realised I was just sliding and I didn’t hit anything so I put the fire extinguisher on because I was terrified of fire. I then realised the engine was still running while I was upside down, so I switched the engine off and then I started to get soaked in fuel, and I then started to pass out from the fumes.

“I thought any minute somebody will come but I seemed to lay there for an eternity looking up the road and just hearing cars go by and nobody coming. It was quite unbelievable.

“The next thing I passed out and I remember having a nightmare of a bad dream about having an accident and then you wake up. I thought maybe I’m having a dream and then I woke up and heard voices and then they pulled me out.”

Once racing resumed after a lengthy caution, Jaguar maintained its stranglehold on the race – but soon had its own issues to worry about. As day broke, rising temperatures began to take its toll on the radiators, and both cars needed stops to bleed the cooling system. In addition to that, a health issue forced Cobb out of the race, leaving Brundle and Nielsen to alternate in car #60 for the rest of the duration.

Despite engines surviving on “oil alone” according to Brundle, Jaguar completed its domination of the event with the #61 car of Wallace, Lammers and Jones finishing four laps ahead of Brundle, Nielsen and Cobb.

Wallace summed up what the victory meant succinctly.

“The 1990 Daytona 24 Hours was absolutely fantastic,” he said. “To come here as part of the Jaguar team and win the race and be part of a 1-2 is absolutely amazing. The team during the whole race did a fantastic job and I think it was a just reward for their efforts.”

Brundle added: “Obviously as a highly motivated racing driver I enjoyed 1988 more, but having said that and reflecting back on the race, to win for Jaguar and to be part of a Jaguar one-two in such a classic motor race is a very special privilege.”

Jaguar continued racing at Daytona after the collapse of the World SportsCar Championship at the end of 1991, but was unable to add a third victory to its collection, finishing second to Nissan in 1992.

Join Motorsport.tv and access over 800 episodes of Duke Classics, including the full 1990 Daytona 24 Hours review. 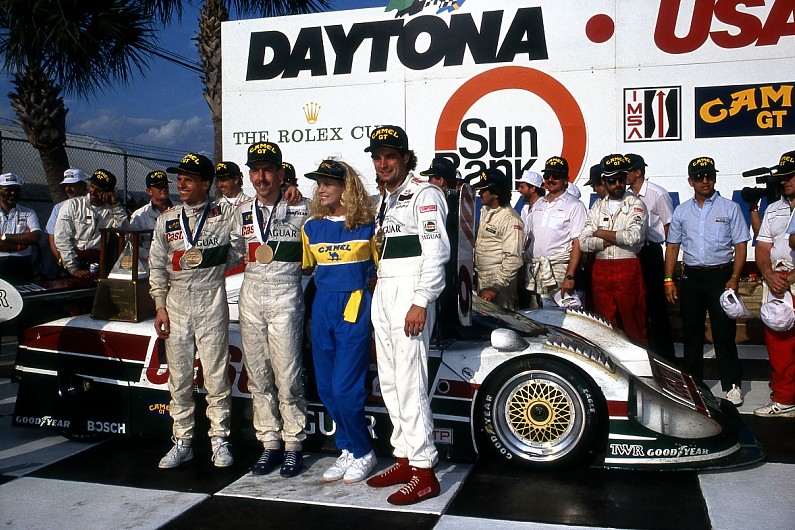