Thursday night’s third practice session was the only opportunity for drivers and teams to get some necessary night running in ahead of Sunday’s race, with most of the session’s fastest times set in the first half after which many teams switched to tyre work.

Toyota’s Kamui Kobayashi improved on his early lap times in the #7 Toyota TS050 Hybrid to set a 3m19.638s in the second hour, closely followed by the second Rebellion of Gustavo Menezes.

Sebastien Buemi was fourth in the #8 Toyota, while LMP1’s fifth and final entrant ByKolles lost a lot of track time after Bruno Spengler hit the barrier at Tertre Rouge 90 minutes into the session, bringing out a red flag.

In LMP2 Tristan Gommendy set the fastest time early on in the #30 Duqueine ORECA 07, his 3m28.013s remaining untouched for the entirety of the session.

United Autosport’s Job van Uitert took second with just over an hour to go in the #32 ORECA, nine tenths shy of Gommendy’s benchmark. With 30 minutes remaining Jean-Eric Vergne lifted his #26 G-Drive Oreca to third, another tenth in arrears.

Both IDEC Sport LMP2 cars remained in the pits after they suffered heavy accidents earlier on Thursday, the team’s #28 ORECA requiring a new tub. 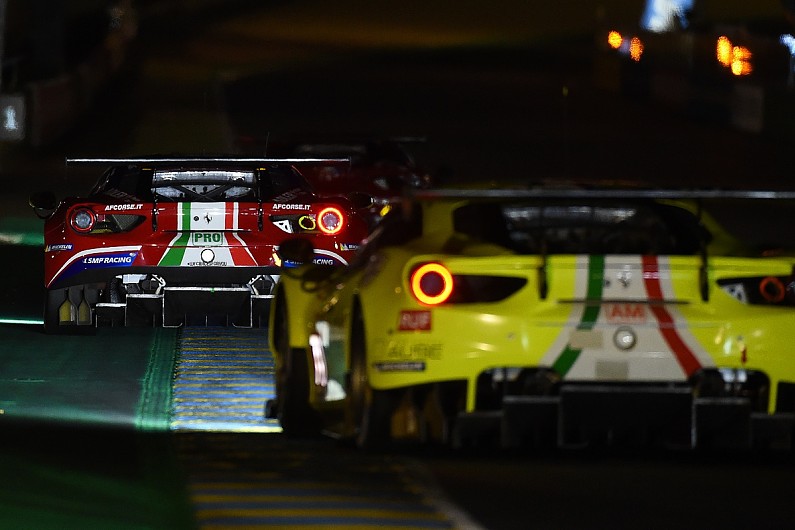 In GTE Pro Porsche’s Kevin Estre took the lead in the first hour, the Frenchman’s 3m52.177s aboard the #92 Porsche 911 RSR-19 was three tenths faster than Maxime Martin in the #97 Aston Martin Vantage, who set his series of fast times in the final hour.

Marco Sorensen took third in the sister #95 Aston, followed by James Calado (#51 AF Corse) in the first of the Ferraris.

Kei Cozzolino was quickest in GTE Am with the Japanese MR Racing Ferrari, his 3m54.490s effort bettering Paoli Ruberti’s time in the final hour.

In the #98 Aston Augusto Farfus also dipped below the benchmark Ruberti set in the #60 Iron Linx Ferrari. The Brazilian got within one tenth of Cozzolino but settled for second.

The session was curtailed 15 minutes early after a huge accident for Bonamy Grimes in the Red River Ferrari. The Briton lost his car under braking for the first Mulsanne chicane and clattered into the barriers, but climbed out unhurt.

Action continues on Friday with a short fourth practice session at 100hrs local time, followed by a Hyperpole shootout in which the six fastest cars of each category will fight for pole. Yamaha “didn’t have anything” to fight for title – Vinales – MotoGP