Two-time DTM champion Rene Rast admitted he didn’t think he be able to take the start in the second race at Zolder after his Audi caught fire on the grid.

Smoke could be seen billowing out of Rast’s car on the starting grid, putting a question mark over his participation in a race where both his main title rivals qualified further down the grid.

Team Rosberg mechanics discovered a fire in the engine bay upon opening the bonnet, but were able to extinguish it with with a piece of cloth and a bottle of water before the car sustained any serious damage.

Rast went on to claim victory after executing a brave double pass on the BMWs of Timo Glock and Sheldon van der Linde at the start, branding the result “perfect” after closing Nico Muller’s lead in the standings to 10 points.

Asked how it felt to take the win after his starting grid scare, Rast said: “Yeah, it was a crazy story. As we parked on the grid with smoke coming up.

“We opened the bonnet, there was fire coming out. At that moment we thought the race was going to be over.

“But somehow my mechanics kept cool and got it under control.

“Then the start obviously from P3 to P1 for the first corner was the key for the success today.

“I got almost hit by Timo who got spun around [after contact with Ferdinand Habsburg] and was very close behind, so I was lucky on that side again. 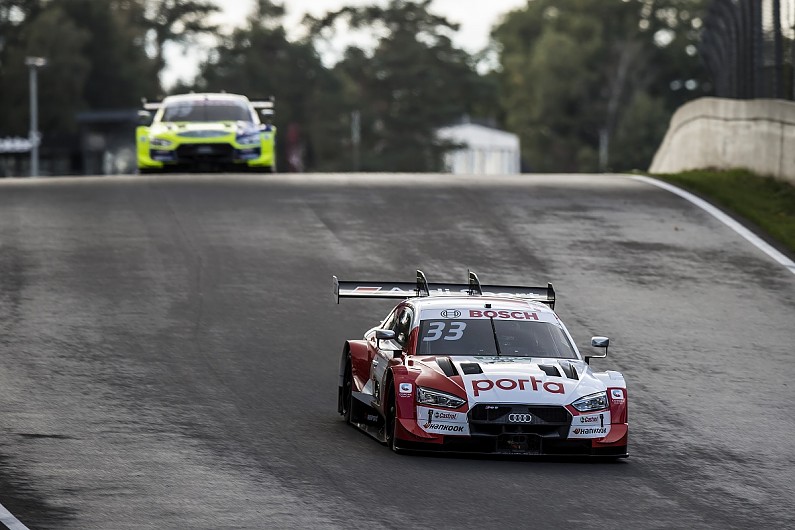 “The end result was perfect. Now we are 10 points behind Nico, we reduced the gap by over 35 points [over both Zolder races]. Now we are back [in the title race].”

Rast believes parking an already overheated car on the grid may have caused the fire, although this is yet to be confirmed by Audi.

“On the way to the grid you try to warm up the tyres”, Rast explained.

“You do that by accelerating and driving very slowly.

“With cold tyres you can’t drive so fast. This doesn’t exactly cool the car down, but if you constantly step on the gas, the car gets pretty hot.”

Rast was fortunate that he was able to complete his pitstop before the safety car was deployed after Robin Frijns’ crash at the pit exit, allowing him to retain the net lead of the race.

When asked if Frijns’ crash played any role in his pit strategy, he said he had been “just lucky”.

“We didn’t really talk on the radio,” he added.

“I got the board that after basically Robin came in, so we tried to overcut him or not get undercut by him. Then he crashed at the exit of pitlane.

“I don’t know if there was a yellow flag or they were allowed to talk to me, but they didn’t. Just heard it when I entered the pitlane that there was a crash.”