Kimi Raikkonen says the extra laps Alfa Romeo completed in heavy rain at the end of FP3 helped get both cars into Q3 at Formula 1’s Turkish Grand Prix.

In a chaotic twice red-flagged session, Raikkonen and team-mate Antonio Giovinazzi qualified a provisional eighth and tenth on the 500th Formula 1 grand prix for the team founded as Sauber in 1993.

It was the first time an Alfa had reached Q3 all season and the first time both cars had made it into the top 10 shootout since last year’s Austrian Grand Prix.

The Swiss cars were among the few that decided to venture out in the worsening rain as Saturday morning’s practice session wound down, with Giovinazzi aquaplaning off the road at Turn 3 and grazing a front-wing endplate against a wall.

But despite the unrepresentative laptimes set, 2005 Turkish GP winner Raikkonen said that the experience had been a valuable learning opportunity for the team and had contributed to its strong qualifying effort in outqualifying the ninth-placed Mercedes of Valtteri Bottas.

Speaking to Sky, he said: “Definitely on the morning we struggled like crazy and then luckily, we tried to do some changes and put some laps in while it was awful conditions and I think it helped a bit in the qualifying.

“It’s still not a nice feeling, but at least I think it’s the same for everybody and we were not too bad. 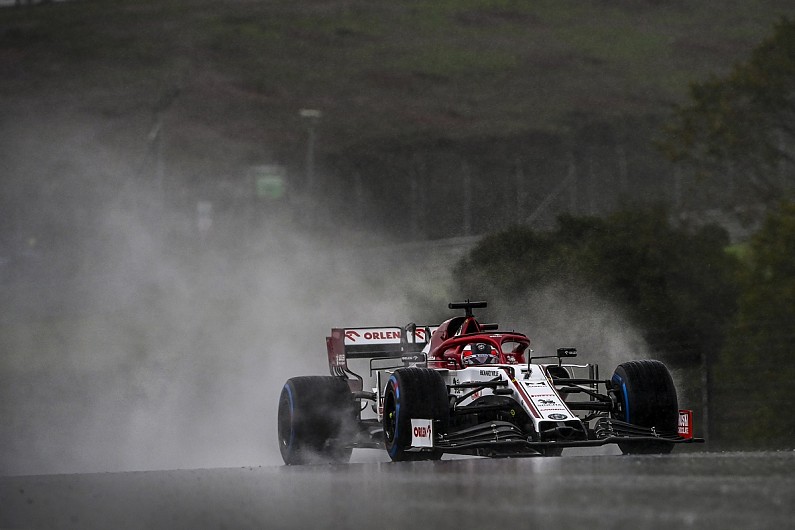 “For sure it benefitted us to be in this kinds of conditions on the track.”

Raikkonen, who overtook Rubens Barrichello as F1’s most experienced driver ever at the Eifel GP, added that the track conditions were “one of the worst ones” he had experienced in his long career.

“It was so easy to spin, I lost it on one of the laps going out of the box,” he said.

“But we managed to make I think the best out of it.

Giovinazzi struggled in Q3 to switch on his intermediate tyres and ended up 9.46s slower than provisional polesitter Lance Stroll, but said the “secret” to his qualifying performance – including the fifth-quickest time in Q2 – had been “to stay on the track”.

“Today was really difficult, the confidence was coming up lap after lap,” said the Italian, whose previous best qualifying position was 14th at the Eifel GP.

“This is what I did, I started slowly, slowly and then in the last laps I put it all together.

“In Q2 it worked, in Q3 unfortunately I used intermediate tyres, they didn’t turn on so it was really difficult.”