Perez faces a 10-place grid penalty if he gets a third in the course of this season, and Szafnauer says that the Mexican will now have to “drive like a saint” in the remaining five races.

Perez received the first for impeding Pierre Gasly in Q2 at Portimao, and was then given a second for a blocking incident with the same driver in the closing laps of the race.

“They didn’t touch,” said Szafnauer of the Gasly blocking incident. “Sergio move first, before Gasly did.

“Sergio is allowed to make that move in defence, you can’t move twice, but you’re allowed to move once. Gasly got out of the throttle. And there’s no contact.

“So why the reprimand? On lap one Sergio is hit by Verstappen, who comes back onto the track after being off track, comes back on acutely in order to get his car in a position so he has grip again, and runs into Sergio, and they do nothing.

“Sergio and Gasly don’t touch. I mean, isn’t that what the fans want? Hard defending, good racing? If we start reprimanding drivers and punishing them for racing hard, but safely, where’s that going to take our sport?”

With regard to the Verstappen clash he said: “That was a collision, right? So you’ve got to look at a collision. The Gasly/Sergio thing was not a collision. It was a good, hard defending, and you punish that? 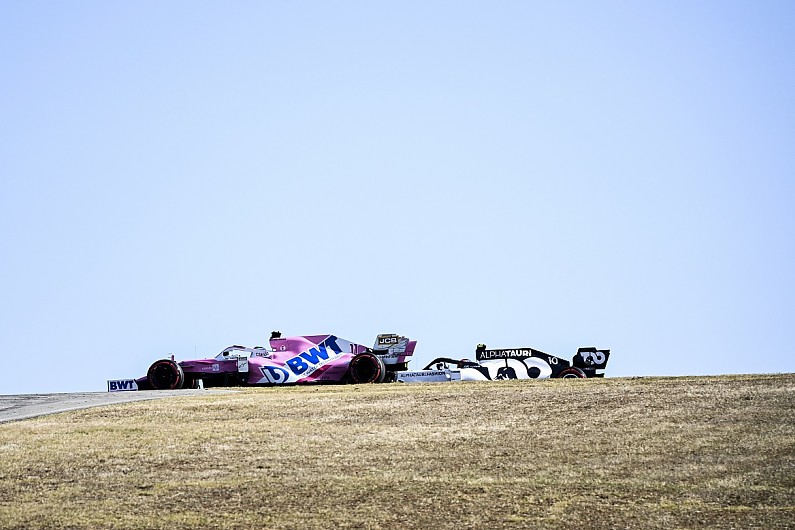 “But then when somebody does collide, you don’t do anything? That’s two times in a row. I don’t know if you saw Leclerc and Lance [in Russia], it is a very similar thing. You cause a collision and then nothing.”

Szafnauer, who said he would bring up the subject in Monday’s F1 Commission meeting, added that a reprimand was harsher than it might appear.

“So Sergio, in his whole career, has never been reprimanded ever. He’s got two this weekend.

“One of one of which was in qualifying, where he made a mistake in one of the sectors, didn’t realise Gasly was on a fast lap behind him, and got out of the way but not quickly enough.

“Well, Gasly got through Q2 into Q3, it didn’t cause him any harm. Reprimand.

“You saw the other incident, reprimand. Now for the rest of the season, he’s got to drive like a saint. He’s not gonna be able to fight hard, because there is a risk of a reprimand, and then you get a 10-place grid penalty. So I think that’s quite harsh. You may not think that reprimand was harsh, but it is.”

Szafnauer was also frustrated that Stroll was given a five-second time penalty in Portugal for causing a collision with Lando Norris.

“Lance tried a couple times to overtake him as he was quicker than Lando,” he said.

“And Lando decided to stay in the middle of the track, put himself in the middle, probably to defend. And Lance had a choice of going on the inside or the outside, and he chose the outside and when he turned in, they came together.

“I think the decision was a bit harsh, to give him a penalty. Is that a racing incident? Lance was a bit ahead of Lando when he turned in, Lando put himself in the middle of the track, Lance was a bit quicker.

“I don’t know if Lance could have without turning in, made the corner or got around there. To me a bit of a racing incident.”