Quartararo says Portimao is the “most difficult” MotoGP track – MotoGP

Petronas SRT’s Fabio Quartararo admits the Algarve circuit hosting the Portuguese Grand Prix is the “most difficult track” he has ridden a MotoGP bike on.

The flowing and undulating nature of the track has proven trick for many riders, with Quartararo saying the hardest part is the lack of braking references.

“I think this is the main thing we are struggling with in MotoGP because we know how important it is to brake in the perfect point and constantly you brake earlier than what you need.

“But I think tomorrow we need to fix that and everybody will take a step.

“But I think it’s the most difficult track I ride in MotoGP.”

Quartararo said on Thursday his main objective this weekend was to have fun following a wretched run of form since winning the Catalan GP in September.

Despite trying a wealth of things on his Yamaha, including the carbon swingarm his team-mate Franco Morbidelli has been using to good effect, he was left “impressed” by his lap time and believes there is still margin to improve. 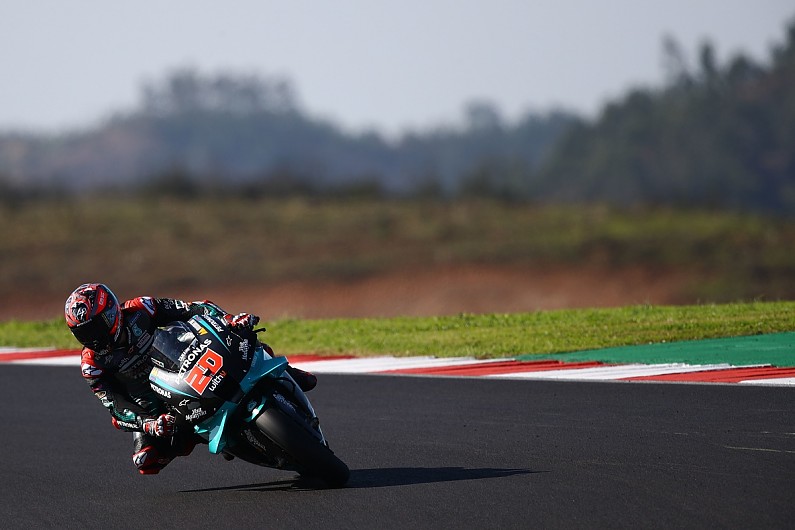 “Finally, I can say that I had fun out there and track is amazing, downhill, uphill,” he added.

“So, really good. Impressed about my lap time at the end because, I would not say I was lost, but we made many changes.

Yamaha test rider Jorge Lorenzo rode at the Algarve track last month on the 2019 bike with a view to sorting a base set-up for the race riders.

But Quartararo admits his settings, particularly with gearing, ended up being “quite different” to what Lorenzo had used in the test.

“We used quite different, but we at least we had a base that I think was important,” he said.

“But some corners, almost all the corners, we were using one more gear in the slow corners. So that’s important.

“But the base was not bad, and at the end from FP1 to FP2 we didn’t really have the chance to try gearboxes, but we needed to try the carbon swingarm.

“So, I changed bike and I tried a different gearbox with all the changes that we do. But was positive.”