Quartararo: MotoGP title bid will be over if I don’t take risks in European GP – MotoGP

Fabio Quartararo says his championship “will be over” if he doesn’t “take big risks” from 11th on the grid in Sunday’s MotoGP European Grand Prix.

The Petronas SRT rider has struggled all weekend in the wet conditions, and was fortunate to make it straight into Q2 due to Friday’s FP2 being run on a drying track.

With the track wet but drying for qualifying, Quartararo was once again on the back foot and could do no more than a 1m41.943s – which was 1.5 seconds off the pole time – in a lowly 11th.

The Ricardo Tormo Circuit is notoriously tricky to overtake on, while Yamaha riders have repeatedly complained of how difficult it is to pass on the M1.

But, with championship rival Alex Rins starting second and points leader Joan Mir fifth, Quartararo admits he has “nothing to lose” from 11th and has to be “really aggressive” from the off.

“Honestly, the position I am in tomorrow, I really have nothing to lose,” Quartararo said, when asked by Autosport if Sunday’s race would be the most important of his season.

“My goal is to win the championship and if I don’t take big risks tomorrow, it will be over.

“So, now I’m really on the mood that I do the best, if I need to be really, really aggressive tomorrow I will be and if we crash or something it will be for a good reason.

“I just want to be in the best way possible. Of course, I’ll try to make a really good warm-up, which will be so important.

“But it will be really important for us tomorrow that we make a good race.” 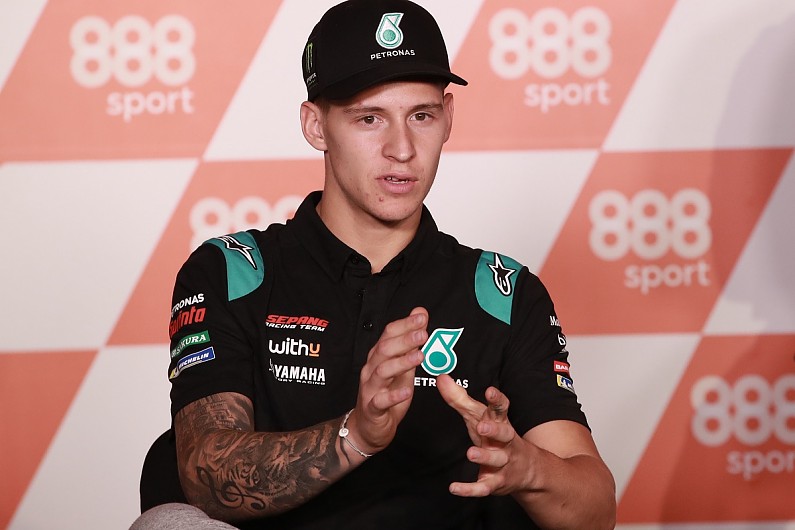 Quartararo says he “tried everything” he could on his Yamaha to improve his “really bad” feeling in wet conditions, but it made no difference.

This has perplexed him, as he insists he’s “not a disaster” normally in the wet.

“I’m always losing the front, losing the rear, I’m sliding and floating all the time.

“For me, this is kind of a feeling that is so difficult to understand because last year in the wet in every single session we had, I was in the top 10 and this year with the situation we have, I’m in the top five – but from the last position.

“So, [it’s] difficult to understand why and really frustrating because I know I’m not a really good rider on the wet, but I’m not a disaster like this.”

Quartararo hasn’t been on the podium since his Catalunya win in September, but insists he’s still capable of taking the title.

“I’m strong enough, because when we have everything under control I am fast,” he added.

“We are struggling much more than last year but I am strong enough to fight for the championship.

“If I was not strong, I would not have won three races this year and not made some good races.”