Quartararo: Morbidelli’s Valencia MotoGP pole advantage too much to close down – MotoGP Fabio Quartararo admits he wouldn’t have been able to close down team-mate Franco Morbidelli’s MotoGP Valencia Grand Prix pole time even with an extra soft tyre.

Petronas SRT rider Quartararo was forced to go through Q1 for the first time since Phillip Island last year, and although he progressed into Q2 he had to use up his reserves of fresh soft rubber to do so.

This was still an improvement after a tough Friday – which he labelled one of the worst days of his season – but concedes he is “more on the limit” at the Ricardo Tormo Circuit than he normally would be in a qualifying situation.

“I’m seven tenths behind Franco and normally qualifying is my strongest points, I put in a new tyre and I just go to the limit,” he said when asked by Autosport about his qualifying.

“Right now, the limit is 30.8s and we are seven tenths behind. Unfortunately, we didn’t have another tyre in Q2, but I would not have improved seven tenths. 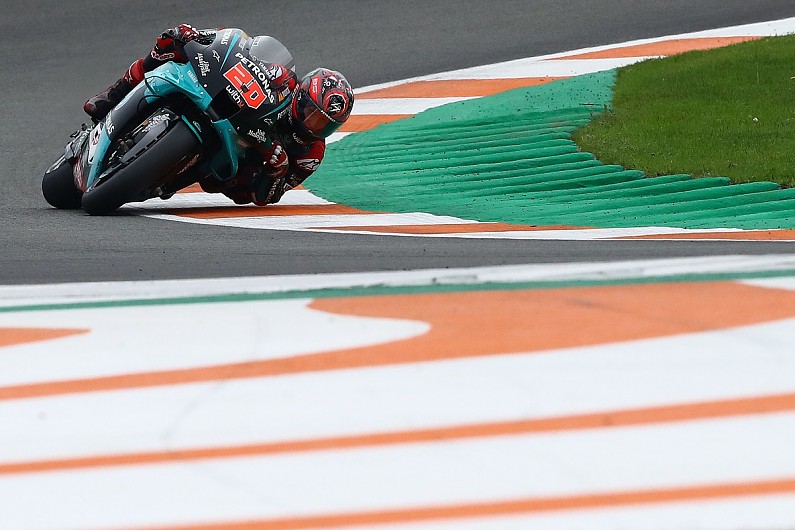 “This year in general, and more here, I’m reaching on the bike and I don’t have the flow to make it all-in-one moment from the braking to the corner apex.

“This is something we can’t understand with all the changes we made yesterday and today.”

Quartararo admits he and his team has made more changes to his Yamaha this weekend than across the entire 2019 campaign, but they still aren’t improving enough.

“I think the amount of changes that we did this weekend are much more than what we did all season last year,” he said.

“We make big changes because we think it’s going to work, but every time it’s the same problem, we are pushing and trying to adapt to the bike.

“But right now, apart from Franco who has a different bike from us, we are all running in a bad way.”

Needing at least to be on the podium to stand a chance of stopping Mir winning the title on Sunday, Quartararo admits he isn’t focused on what happens with the Suzuki rider right now.

“I’m not thinking about Joan,” he added. “I’m thinking about trying to make the biggest improvement possible in the warm-up, that is something even bigger than today.

“We were talking in the box and I was lost even before we tested the changes we will do. But I believe in the change, the team looks confident.

“There’s not really a strategy. The strategy will be to try to have fun and try to finish as far in front as possible.

“But honestly right now, I’m more in the mood about making a big improvement tomorrow morning and if we make that, I will think about that [Joan].”