Fabio Quartararo says a “strange” arm pump issue from around midway through the MotoGP Portuguese Grand Prix led to him dropping down the order to a lowly 14th.

The Petronas SRT rider looked the strongest of the 2020 Yamaha runners at the Algarve Circuit after qualifying fifth, feeling a top five finish was possible.

But Quartararo didn’t get off the line well owing to a problem with his holeshot device, before the unexpected arm pump issue left him powerless to avoid being shuffled back to a disappointing 14th.

It continued his miserable run of form since the French GP, with the Frenchman failing to score a top six in the final six events to end the year only eighth in the standings.

PLUS: How Yamaha’s MotoGP engine woes haunted it in Portugal

“[It] was really bad for me,” said Quartararo, whose team-mate Franco Morbidelli firmed up his second place in the 2020 standings with third place.

“I had an issue with the holeshot device for the start, so I made a terrible start, I lost positions.

“I thought that I could have a really good race, but unfortunately from a little less than mid-race I had arm pump.

“So, quite strange. I heard also some riders had arm pump.

“So, really sad and we had the opportunity to finish between P5 and P8 today. So difficult to lead the way and I wanted to do much better.” 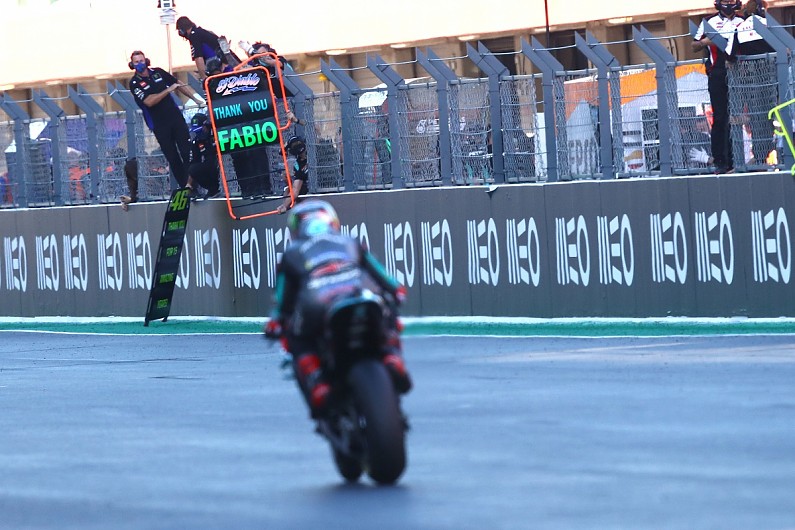 Reflecting on his sophomore campaign, Quartararo admits “in some ways” his 2020 season was “great” owing to his three grand prix victories at Jerez and Barcelona, but has been left upset by the manner his title chances collapsed.

“Well to finish the last six races so bad, it’s difficult to say I’m happy about the season,” he added.

“But I can say that it will be a season to remember, they bring me three victories.

“Some riders don’t ever win in MotoGP and I have three wins already, so I think looking back at this it’s really positive.

“But, in some ways it’s a great season, but unfortunately not such a great end. So, I’m a bit sad.”

Quartararo will depart Petronas SRT to step up to the factory Yamaha squad in 2021 alongside Maverick Vinales, with Valentino Rossi taking the Frenchman’s place at the satellite outfit.