Pirelli is investigating the rear tyre vibration suffered by Lewis Hamilton in the last Formula 1 race at Imola, and has confirmed the cause of Max Verstappen’s failure.

Red Bull driver Verstappen suffered a right-rear tyre failure with 12 laps remaining in the Emilia Romagna Grand Prix two weeks ago, causing him to retire from the race.

He was not the only driver to struggle with some tyre issues as Mercedes was forced to manage a vibration on race leader Hamilton’s set of hards, sparking fears the set had been damaged.

Hamilton ultimately pitted for soft tyres under the late safety car called following Verstappen’s failure, allowing him to take a fresh set and avoid any vibration issues in the closing stages.

Pirelli’s analysis into Verstappen’s failure showed that his rear-right tyre had some cuts, and although Mercedes did not encounter the same issue with Hamilton, an investigation is underway.

“It started with a little vibration, and we decided to pit the car also not to take any risks,” Mercedes team principal Toto Wolff said.

“It is something that isn’t yet understood on the tyre. The tyre remained intact and was sent to Milan for analysis, and we are waiting for the results.” 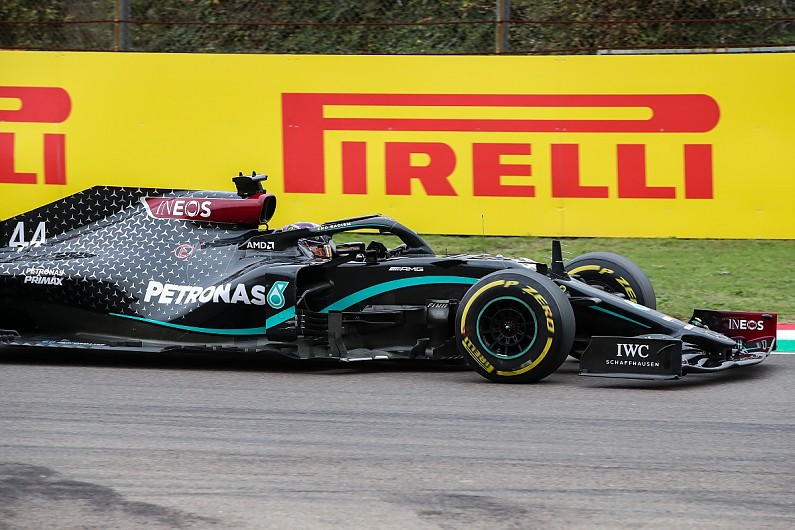 “I can confirm we are analysing the tyre together with the team,” added Pirelli F1 tyre chief Mario Isola.

“The findings will be shared with the team. As Toto said, there was no loss of pressure, just vibration increasing during the run. We are investigating the construction.”

The investigation of Verstappen’s tyre failure at Imola showed a series of cuts that ultimate meant the tyre was not able to maintain the loads it was put under, causing the instantaneous failure.

“We found some cuts on the tread and the sidewall, both inside and outside,” Isola said.

“We believe that the reason of the failure was a damage on the centre of the tread that caused the damage on both the belts and the carcass, so the belts started to detach following this damage.

“At a certain point, when the carcass was not able to keep the load, we had the deflation that everybody saw on television.

“We shared the analysis with the FIA and the team, and this is the evidence that we have.

“Obviously it’s difficult to analyse a tyre that is in pieces, but we sent immediately the tyre back from Imola to our laboratories in Milan, and we did an investigation as a priority.”