Pirelli has been under fire since the failures experienced by Max Verstappen and Lance Stroll in Baku, with tyres the main topic of conversation in the Paul Ricard paddock after the FIA introduced new restrictions on how teams operate them.

Although it was agreed not to reveal details of what was discussed, the consensus among drivers was that it had been a useful gathering.

“It was very productive,” said Sainz. “Honestly, I feel in a way for Pirelli.

“And they were not really producing a tyre to sustain the downforce levels that we are having this year, plus 800kgs of a car.

“So the fact that we are quicker than 10-15 years ago with 150kgs extra on the car, it just shows the amount of stress that is going through the tyres and what a challenge Pirelli has on their hands.

“We’re trying to support them but we are, as drivers asking for being as precautionary, as safe as they can be with everything because we don’t want any accidents.”

Daniel Ricciardo agreed that the discussion had answered some of his questions.

“I was definitely more comfortable leaving the meeting than what I was before,” said the Australian.

“Definitely before the meeting there was a little bit of lack of clarity. Was it the other teams breaking the rules? Was it Pirelli not giving us something good enough? 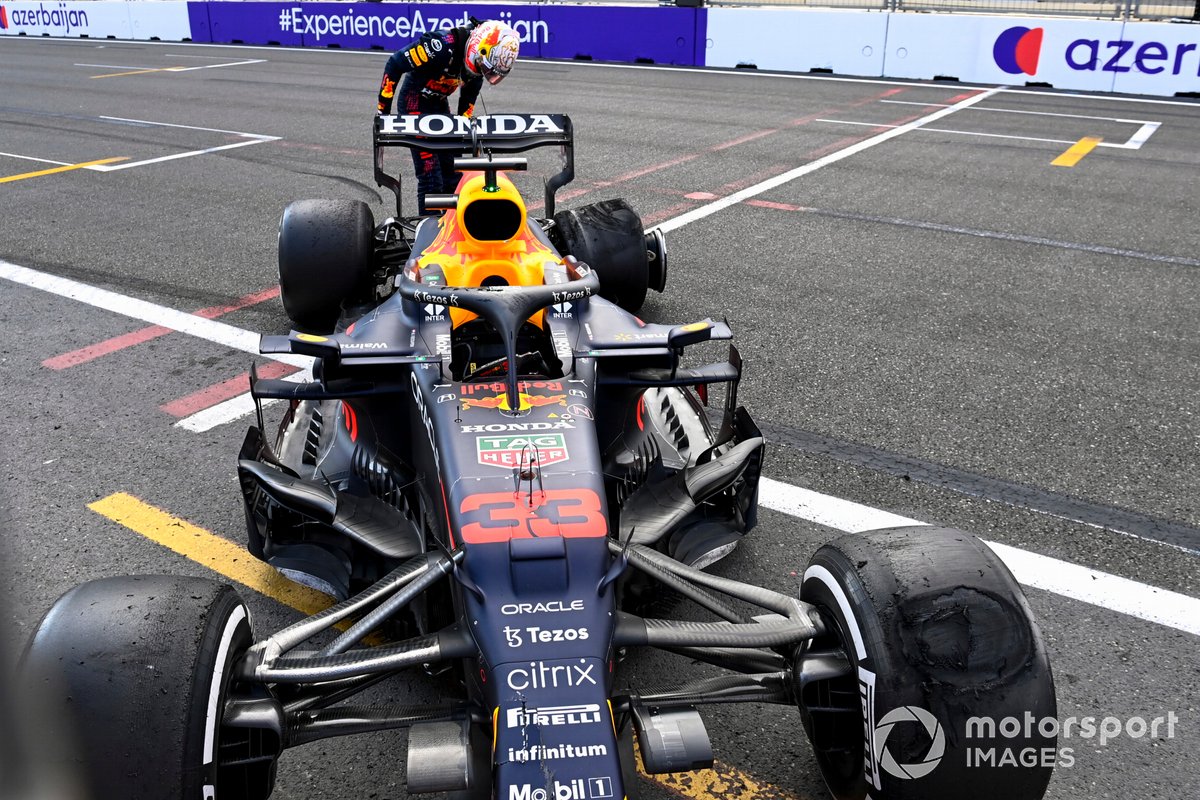 Max Verstappen, Red Bull Racing RB16B looking at the tyre after retiring from the race

“I think we left the meeting with a better understanding. I’ll be honest, I don’t understand tyres, or the technology involved. I was a little more at ease after our chat last night.”

GPDA director George Russell acknowledged that it had been a useful gathering, with an opportunity for all present to air their views.

“Yeah, definitely a constructive conversation,” he said. “Just getting the explanation from Mario and Nikolas [Tombazis] as well from the FIA, it’s good to understand the reasonings.

“They develop the tyre, and simulate everything, expecting it to do one thing, and if obviously on a few cars for whatever reason it reacts in a different way, to something that they don’t measure, then obviously they’re going to have different results.

“So it’s good that they got the explanation and the clarification with these new regulations they have in place. Right now I don’t think there’s any concerns from a safety perspective.”

“We had a lengthy conversation on Friday night, definitely the longest meeting I’ve ever been a part of within the drivers’ briefing, but it was needed, and obviously from a safety perspective everything seems under control.

“We now need to work with F1 and Pirelli to improve the performance side, which obviously is what us drivers are chasing.

“I think we’re not the experts, we just drive and they are the experts, so we have to understand why these issues occurred and now we do and now it shouldn’t happen again because of these new regs.”