Chase Elliott recovered from a pre-race penalty to dominate the NASCAR Cup Series finale at Phoenix and clinch his first Cup drivers’ title.

Elliott’s #9 Hendrick Motorsports Chevrolet had been due to start on pole position, but the machine failed the pre-race technical inspection twice, which under NASCAR rules mandates falling to the rear on the formation laps.

But Elliott, son of 1988 Cup champion Bill, quickly carved through the pack around the one-mile short track, rising into the top five with fellow title contenders Brad Keselowski, Joey Logano and Denny Hamlin by Lap 42 of 312.

At the start of stage two, Elliott battled briefly with Hamlin for second, as Logano pulled away, but the #22 Penske driver reported vibrations in his brake pedal and slowed, allowing Elliott to haul him in, taking the lead on Lap 120, and maintaining it as the green-flag pit-cycle shook out.

Keselowski came back at Elliott in the closing embers of the segment to take the stage win on the final corner, but the #2 Penske driver lost four positions due to a slow pitstop as at the stage break stops, allowing Elliott to take the restart in the lead.

Georgia-native Elliott then led until the final round of pitstops in a race that only featured one caution, with the leader pitting on Lap 260 with Keselowski to cover off Logano and Hamlin who had done so on the previous tour.

The one-lap undercut handed Logano the lead, but Elliott quickly latched onto the back of the leading Ford Mustang, as 2018 champion Logano hit backmarker traffic.

By Lap 270, Elliott had muscled his way past Logano and pulled away from the pack in his Hendrick Chevrolet Camaro to record his fifth victory of the year, and secure his first Cup drivers’ title by 2.740 seconds from Keselowski. 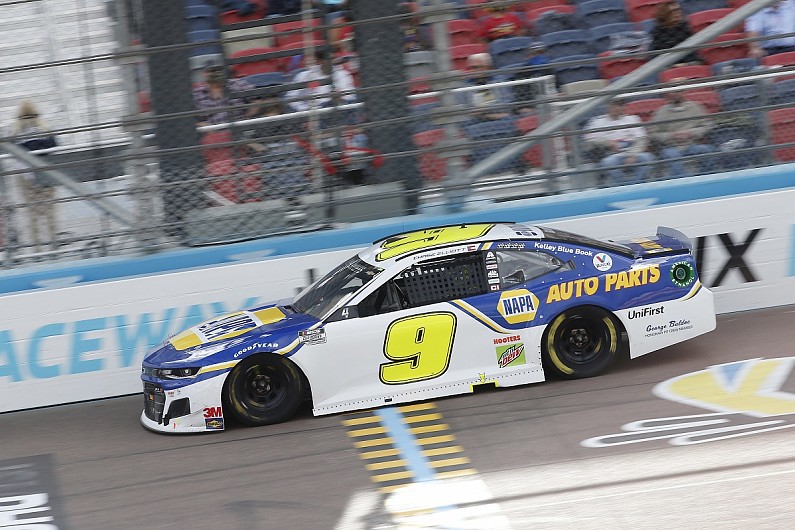 Elliott is the first Hendrick driver to clinch the championship since Jimmie Johnson in 2016, and secured the squad’s 13th Cup drivers’ title to become the third-youngest champin in history.

With father Bill the duo become the third father/son pair to achieve the Cup Series title feat, following Lee and Richard Petty as well as Ned and Dale Jarrett. He is also the fourth driver to have won both Cup and Xfinity titles, following Kevin Harvick, Martin Truex Jr and Kyle Busch.

Behind Elliott, Keselowski, who had struggled with slow pitstops all race, made a late move on Penske team-mate Logano to finish as runner-up in both the race and the championship – his best showing since his 2012 title win.

Logano had looked strong in the early stages, leading the first 107 laps, but did not have the pace on the long runs to match Elliott, ending his fourth appearance in the championship race in third.

Hamlin, also searching for his first Cup Series title, ran strongly in the early stages, battling side-by-side with all three of his title rivals, but the #11 Joe Gibbs driver was the only one not to lead a lap.

Struggling with balance issues around Turns 3 and 4, the triple Daytona 500 winner could only take fourth to round his season out.

In his final full-time race at Cup level, seven-time champion Jimmie Johnson finished in a strong fifth, his best result since third at Dover in the regular season.

Johnson ran a clean race to record his 374th top 10 finish in his 686th Cup start to round off a stock car career that featured 83 wins and a record five consecutive crowns between 2006-10. 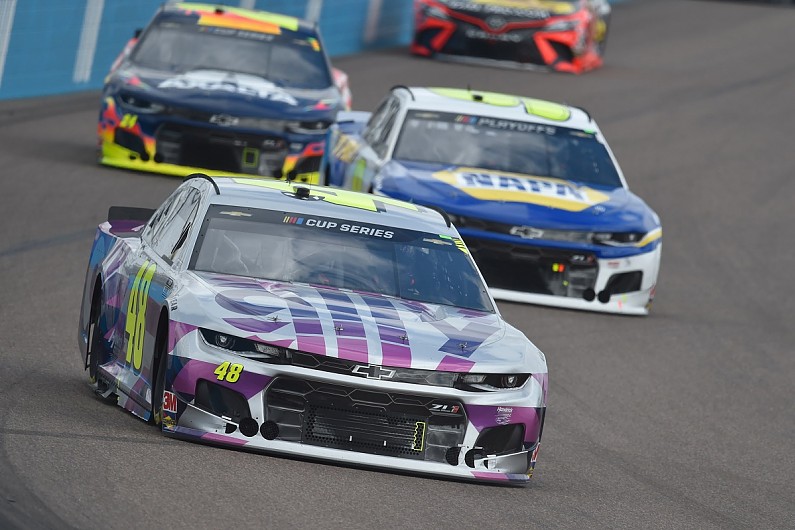 The Hendrick driver got the better of the third Penske entry of Ryan Blaney, who secured his fifth straight top 10 result in sixth following a smart race where he was never too far away from the leaders.

Regular season champion Harvick did not feature as expected, with the #4 Stewart Haas driver struggling in the early stages to make progress from the midfield.

However, as the race progressed and settled into the long periods of green flag running, he found pace to rise to seventh, ahead of Matt DiBenedetto who took an 11th top 10 of 2020 for Wood Brothers racing.

William Byron and Truex rounded out the top 10 for Hendrick and JGR respectively, as 2019 champion Kyle Busch handed over his title with an 11th place finish. Busch is also the only multiple Cup champion set to compete in 2021 following Johnson’s retirement.

Clint Bowyer took 14th in his #14 SHR Mustang in his final Cup race before embarking on a media career, as 2003 champion Matt Kenseth had a quiet afternoon on his way to 25th for Chip Ganassi, in what is expected to be his final start at Cup level. Evans crashes out of Rally Monza, Ogier in line for seventh title – WRC