The Mexican ran last at the end of the opening lap after being hit by Ferrari’s Charles Leclerc at Turn 4, but was able to fight his way back up the order.

Perez sat third before the safety car was deployed after Williams’ Jack Aitken hit the wall and left his front wing at the final corner, prompting Mercedes to try and pit both of its cars.

But a tyre mix-up meant the team sent George Russell – who had led the race up to the safety car – out on a mixed set of tyres, and then failed to change Valtteri Bottas’s tyres in a lengthy pit stop.

It catapulted Perez into the lead for the restart with 19 laps to go, but the Mexican looked set to come under pressure from the recovering Russell in the closing stages.

But a puncture caused Russell to drop down the order once again as he pitted for a fourth time, leaving Perez to cruise home ahead of Renault’s Esteban Ocon and Racing Point team-mate Lance Stroll.

It marked Perez’s first win since the 2010 GP2 Feature Race in Abu Dhabi, and marks a new record for the most number of F1 starts before a maiden victory, coming at the 190th attempt.

“I’m speechless,” Perez said. “I hope I’m not dreaming, because I’ve dreamt for so many years of being in this moment, 10 years it took me – incredible.

“I don’t know what to say. After the first lap, the race was again gone, same as last weekend. But it was about not giving up, recovering, going through it, just making the best we possibly could.

“This season the luck hasn’t been with us this year but we finally got it.

“I think we won today on merit. The Mercedes had some issues, but I think in the end my pace was strong enough to hold George, who did a fantastic race today.”

Perez revealed that an error after his first lap pit stop left him struggling with a tyre vibration, only for his car to come alive after another stop, allowing him to pick off Ocon and Stroll shortly before the second safety car period. 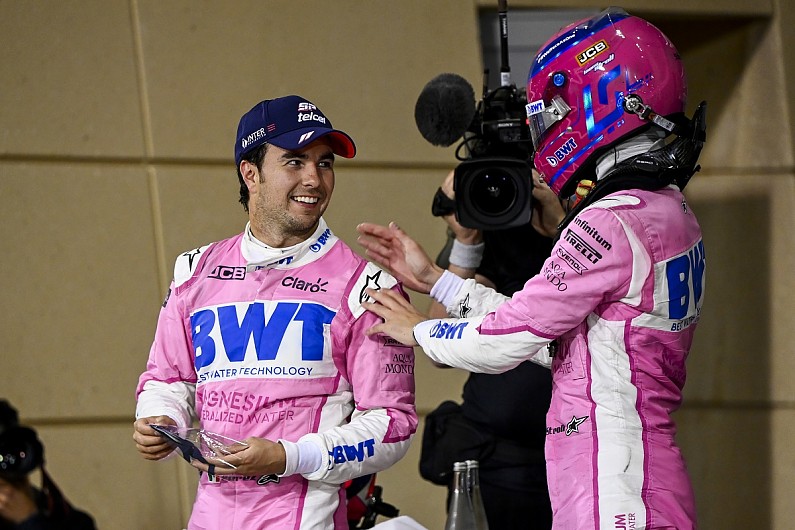 “I made a big mistake during the safety car, I locked up my front left tyre badly,” Perez explained.

“So during my first stint, I had so much vibration. But as soon as I recovered in the second stint, I told my team this car felt just like a limousine, so easy without the vibrations.

“We had tremendous pace. And then I think we read really well the race throughout the weekend. We came here thinking it was going to be a two-stop, but after my long run on Friday, we knew what we had to do today.”

The victory comes in Perez’s penultimate appearance for Racing Point ahead of his exit at the end of the year. The Mexican is currently without a drive for 2021, and has already said he will take a sabbatical before returning in 2022 if he does not land the seat at Red Bull.

Asked if the win strengthened his resolve over his plans for next year, Perez said: “It just gives me a more peace with myself, to be honest.

“What happens is not so much in my hands at the moment. But I know I want to keep going. So if I’m not in the grid next year, I will be back in 2022.”