Tech3’s Miguel Oliveira says Pramac rider Francesco Bagnaia “was acting childish” after the pair had a run-in on track during MotoGP qualifying for the French Grand Prix.

Bagnaia came across a touring Oliveira on the run through the La Chapelle section at Turns 5 and 6 at Le Mans early in Q2 while on a flying lap, forcing the Ducati rider to abort the effort.

The Pramac rider was just 0.014 seconds outside of the provisional pole time at that point and was visibly furious with Oliveira.

Bagnaia was still frustrated with the Tech3 rider as both entered pitlane and both came close to contact, which Oliveira called “not acceptable”.

“Pecco was acting very childish because after my third lap in Q2. I was off the ideal line, but not completely off the track,” Oliveira, who qualified 12th, explained.

“I could not see that he was coming and he started to wave his hand.

“For me, the worst thing is he crossed his bike to my one like wanting to hit me and make me crash, also coming into the pits.

“For me, it reflects what he is and he is a child.

“When you endanger another rider because of one fast lap, it’s normal to have this attitude.

“I might make mistakes on track but I always try to respect my opponent.

“For me, this was not acceptable from his side.” 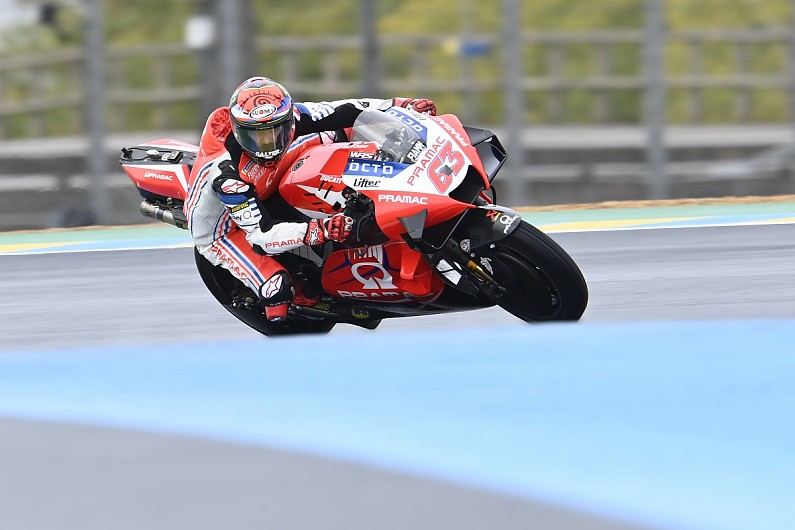 Bagnaia – who will start from seventh – has apologised to Oliveira and concedes he “exaggerated” his response to the Tech3 rider over the incident.

“I want to apologise to Miguel because when I’m on the bike and I find someone who goes slowly and slows me down while I’m pushing hard, I realise I’m very nervous,” the Pramac rider said.

“I certainly exaggerated, I was too nervous and angry.

“He was riding slowly, but he was probably just thinking that in qualifying you just push for three laps and then go back to the pits.

“For me it was the fourth lap and I was still pushing.

“In any case, if I meet him I will apologise for my reaction, but I will ask him to be more careful about what is happening behind him.”