Sebastien Ogier is “proud” to be a record-breaker like his boyhood idol, Ayrton Senna after becoming the most successful driver in Rallye Monte Carlo history.

The 37-year-old Ogier has achieved the feat with five different manufacturers across three decades, his first coming as an Intercontinental Rally Challenge driver in 2009 with Peugeot. The rest as a World Rally Championship points scorer, driving for Volkswagen, Ford, Citroen and Toyota respectively.

It also marked a half century of wins in the sport’s top division alongside Julien Ingrassia.

The streets around the Principality – where the WRC’s season-opener finished on Sunday afternoon – were kind to Senna who recorded a record six Formula One Grand Prix triumphs there between 1985 and 1993. – an achievement Ogier wanted to draw comparisons with.

“It is a special day with these numbers but records are not the thing you are really chasing,” said Ogier.

“As a competitor, I go for the win when I enter any competition.

“This place has always been unique for me for many, many reasons. My idol was Ayrton Senna and he still has the record here and I join him a little bit with this record – and that makes me proud. 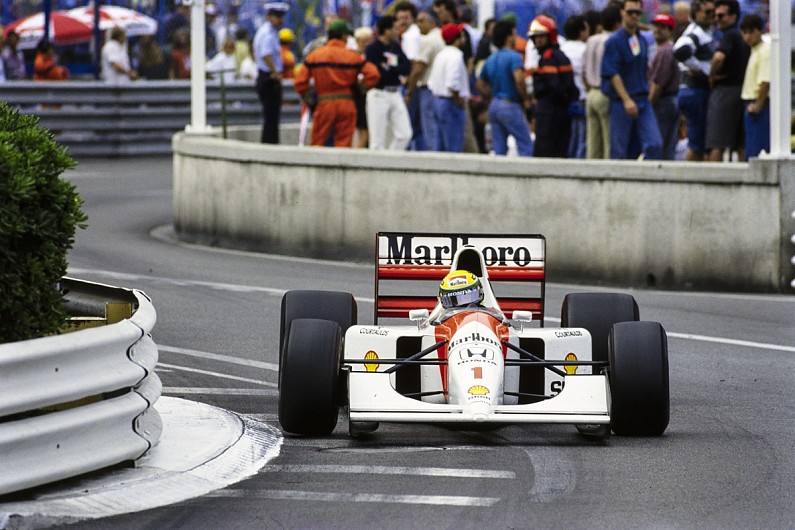 “I think I can dare to say that [this win makes me one of the Monte Carlo greats], yes.

“I definitely have a good feeling for this rally. Probably being born in the Alps helps me to have this connection with the mountains, with the winter conditions we have to face here.

“This is the rally that gave me the dream to be a driver one day.

“The rally I watched as a kid and back then, I was dreaming just one day to have the chance to do it.

“Collecting eight trophies from this rally is something I would have never thought of and I’m very proud of it.”

A brake issue on the opening leg followed by a puncture and spin on Friday were the only blots in the copybook of the Toyota driver at an event that was heavily curtailed in distance because of COVID-19.

“We reacted quickly to come back into the fight and it’s not often these days that you see differences in the stage times like this [because of the new tyres],” Ogier added.

“Of course, I was happy to see that I could make a difference when I was pushing.”

Ogier tops the standings by nine points from Evans ahead of the championship’s visit to the newly installed Arctic Rally Finland on 26-28 February.