Lando Norris admits the small gap to pole in Abu Dhabi Grand Prix qualifying “took me by surprise”, but was not solely down to his fresher Formula 1 power unit.

Norris was aided by a fresh Renault power unit in his McLaren car that was fitted for the last race in Sakhir, with most of the grid using engines that are nearing the end of their lives.

Asked by Autosport about his qualifying display and how much of a boost the fresher power unit offered, Norris hailed his qualifying lap as being the best of the season.

PLUS: Why McLaren’s fun-loving sophomore is getting the balance right

“Obviously I’ve got the new PU in, and it’s helping me out a lot more than what it was bringing me down over the last three or four weeks,” Norris said.

“Maybe I have half a tenth advantage or something over the whole lap. I’m not two-and-a-half, three-tenths down like the last few weekends, a bit more competitive, which is nice.

“I didn’t think that was the help at the end, I think my Q3 lap was just very strong, and just a very nice, tidy lap.

“It wasn’t like it was perfect altogether, but it was definitely my best of the year, I think in terms of getting the tyres in a good window and maximising what we have as a package this weekend. 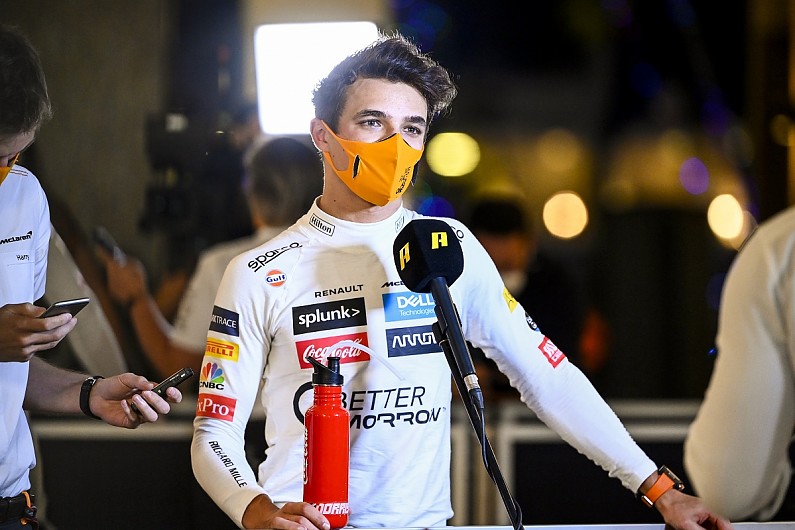 “It took me by surprise, and probably all of us by surprise, how close we were to pole in the end of the day. I think that was the surprising thing.

“But of course, P4 and the lap I did, I was very happy with.

“It was a nice way to end qualifying this season.”

Team principal Andreas Seidl was eager to review all of the data from qualifying before making a firm judgement of the gap, but remained realistic of the job McLaren must do to catch the leading teams.

“Lando was feeling comfortable with the car all weekend, and in the end, he was building up in qualifying and simply did a brilliant lap as he said, probably one of the best laps he did in qualifying since he became an F1 driver,” Seidl said.

“Regarding the gap to both the Red Bull and Mercedes, to be honest, I simply need to wait for more analysis, if we understand if they had any specific issues with their qualifying sessions.

“It’s nice to be that close to them, but at the same time we also know where we are compared to these guys.

“But it’s great motivation to have a qualifying like this, the last race of the season, and yeah, another confirmation that we are heading in the right direction as a team.

“We also know that we have a long way to go, so you always need to be realistic as well, as where you are, and about the steps you can make in the next years.

“But we have a very talented and motivated team here at the track and back home, and obviously very happy with the progress we could make this year.”