McLaren’s Lando Norris says he made the “worst start of everyone’s career ever” in Formula 1’s Turkish Grand Prix before charging back to claim fastest lap and eighth place.

The Englishman started from 14th place in Istanbul after taking a five-place grid penalty hit for not respecting flags in qualifying.

He got away badly on the wet track after bogging down with an anti-stall issue that saw him drop almost to the back on the first lap, although he gained places from incidents involving Esteban Ocon and Valtteri Bottas.

He then put in a storming drive that saw him climb up the order with several bold passing moves before he claimed the fastest lap bonus point right at the end.

“But every time we got into clear air and had some nice gaps in the car ahead, the car came alive, and we had really good pace, but it was just always difficult to put yourself in clean air and with a nice gap.

“It was a bit of a patient game that we had to play all the way through.

“The overtakes were nice, I got lucky with Daniel [Ricciardo] and George [Russell], because it’s so difficult to overtake you have to take some risks. 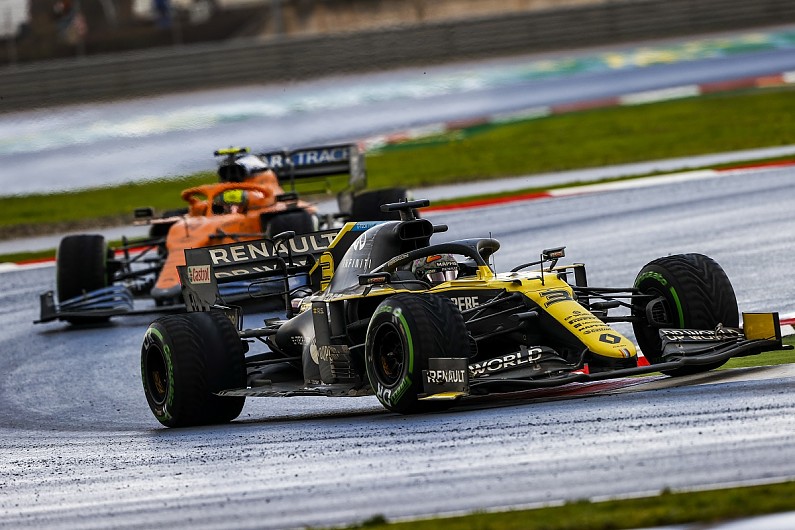 “There’s one line you have to follow, so as soon as you go off line you just lose the car. It was tricky, but I took the risks I had to take in order to finish.”

Norris said that the McLaren performed well on worn intermediates, and that managing to wear it down to an almost-slick state meant that the tyre performed better than a normal slick tyre would have done.

He added that the softness of the tyre meant that it was easier to keep life in it.

“I think slicks were never an option, especially with this track surface,” he said.

“”The inter as a slick, is almost better than the slick. Because the operating window is much lower. It’s a very soft tyre. So the grip we had at the end, although some corners were still wet, I did a 1m36s.

“The last corner was completely wet, we were losing at least three, four seconds. So if you think about it, some of the corners we were quicker on an inter then we did all weekend on a slick, which is very weird.

“But it’s just how weird this tarmac is, and how it suits the tyres.

“There are some things you could do differently. But there’s also how you manage them.

“I think that was our main focus; not over-killing them and over-pushing, but just using them in a proper way in a good way, and that paid off.”