Lando Norris has been hit with a five-place grid penalty for the Formula 1 Turkish Grand Prix after setting his fastest lap under double-waved yellow flags in Q1.

Norris initially qualified 11th for McLaren at Istanbul Park on Saturday, but was summoned to see the stewards after the session over a yellow flag infringement.

A number of drivers had their laps reviewed for making improvements despite yellow flags being shown at Turn 8 following a spin for Williams driver Nicholas Latifi.

The stewards confirmed in a bulletin on Saturday evening that Norris had been hit with a five-place grid penalty for failing to slow for the double-waved yellows.

Norris has also been handed three penalty points on his FIA superlicence, taking him up to five for the 12-month period.

While the stewards recognised that Norris did slow in the region of the yellow flags, as he improved his overall lap time, he breached the sporting regulations, thus resulting in a penalty.

“Telemetry shows that Norris slowed in the sector and resumed speed after the incident,” the stewards’ report reads. 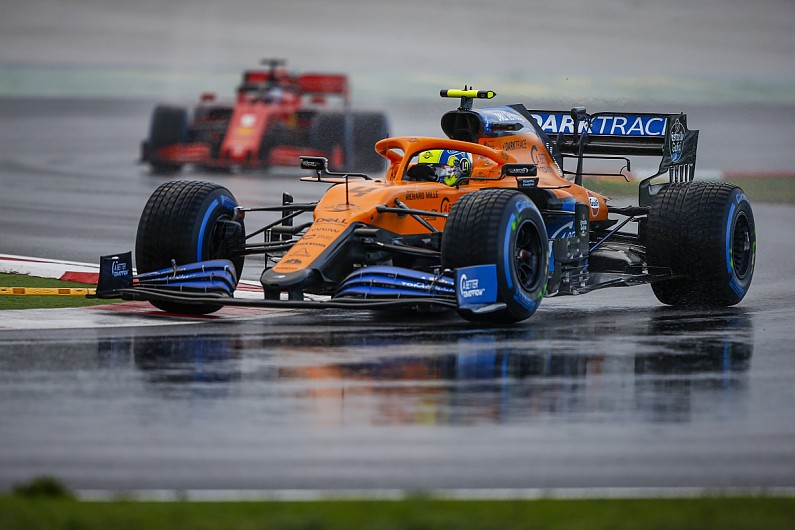 “Norris then asked his team if he should abort the lap, but was told to stay out because of the rapidly changing track conditions.

“Norris completed the lap, which turned out to be his fastest lap of Q1.

“While the stewards acknowledge that Car 4 was not attempting to set a quick lap time, due to the changing track conditions he nevertheless did so and thereby breached the referenced regulations.”

The penalty drops Norris from 11th to 16th on the grid, meaning he will start one place behind McLaren team-mate Carlos Sainz Jr. Sainz had qualified 13th, but was also penalised after impeding Racing Point’s Sergio Perez.

Sebastian Vettel moves up to 11th on the grid for Ferrari ahead of team-mate Charles Leclerc in 12th, with Pierre Gasly and Kevin Magnussen taking 13th and 14th respectively behind the two McLarens.

The stewards are currently investigating Williams’ George Russell for failing to slow for yellow flags in Q1, but the British driver is already due to start last as a result of an engine penalty.

Pole-sitter Lance Stroll escaped any sanction for failing to slow for yellow flags in Q3, having set his best lap on a single-waved yellow.