Lando Norris hit out at Lance Stroll following their crash in the Portuguese Grand Prix, saying the Racing Point Formula 1 driver “doesn’t seem to learn with anything he does”.

Norris had run as high as third for McLaren in the opening stages of Sunday’s race at Portimao, and was in contention for a points finish prior to his collision with Stroll on lap 18 of the race.

Stroll looked to pass Norris around the outside at Turn 1 despite being out wide on the kerb, and turned into the McLaren driver on the inside, resulting in contact.

It left Norris with damage that had to be repaired at a pitstop soon after the collision, ruining his race, while Stroll received a five-second time penalty for causing the crash.

Norris ultimately finished the race down in 13th, after later struggling with a slow puncture, while Stroll retired with 15 laps to go after dropping to last and receiving a second five-second time penalty for exceeding track limits.

Speaking about the collision after the race, Norris expressed his confusion over Stroll’s move and why he tried a similar pass to the one which resulted in contact with Max Verstappen in practice on Friday.

“I don’t know what he was doing really,” Norris said.

“I don’t know where he was really. He went to the left, which I was quite surprised by when he easily could have gone to the inside. I was easily halfway alongside, and he just turns in.

“He obviously didn’t learn from Friday, but he doesn’t seem to learn with anything he does. It happens a lot, so I just need to make sure I stay away.” 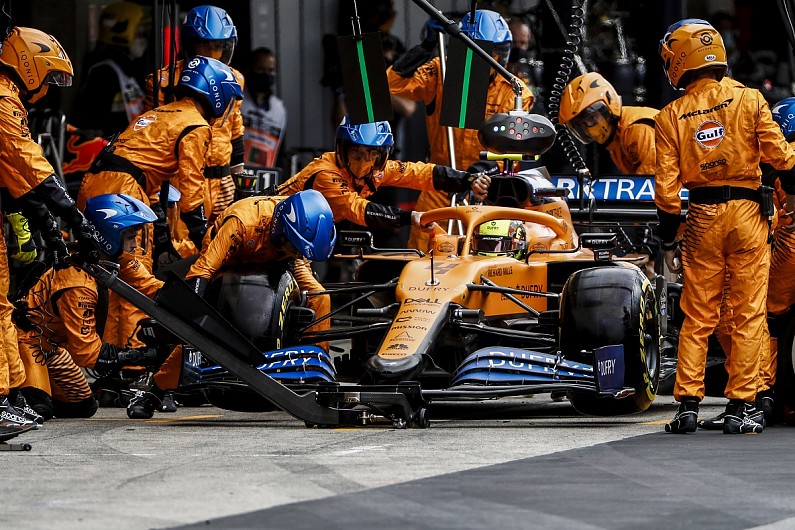 Norris said that he was left “just trying to survive” after the incident due to the damage sustained, and that he felt points were possible had it not been for the clash.

“I was just on my own for a lot of the race,” Norris said.

“We were struggling a lot with the wind initially, and then I had a puncture which meant I had to box again on the second stop.

“Then the final stint, we were quick, and we had good pace, but we were just way too far behind where we should have been.

“It’s a shame, we could have scored some points today, but it just wasn’t to be.” Mercedes unsure how much performance it has recovered since testing