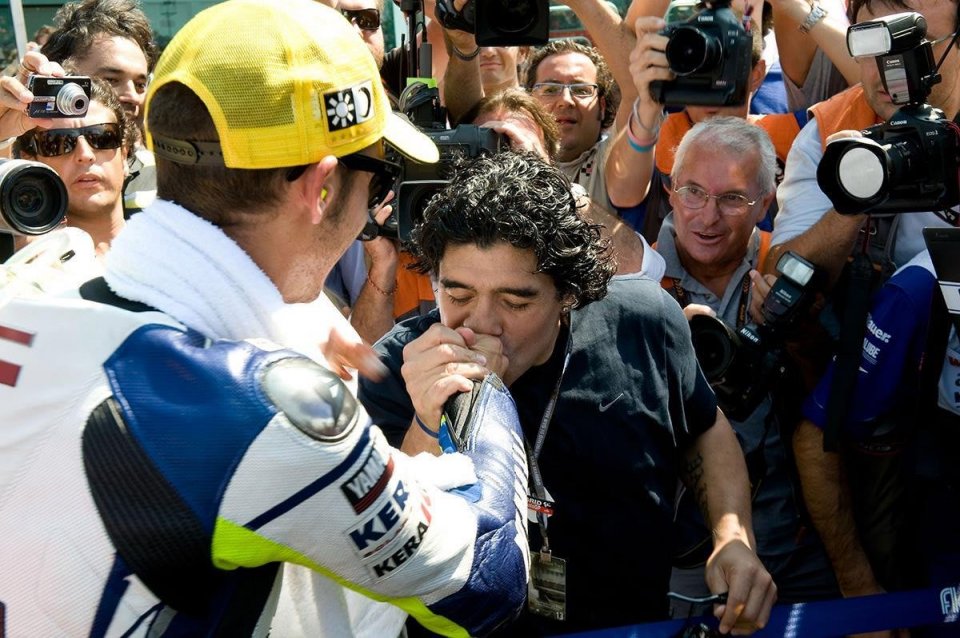 Diego Armando Maradona is dead, according to reports from the “Clarin” in Argentina. Word has it that he died of cardiorespiratory arrest while recovering from brain surgery. He had recently been operated on and was in his home in Tigres. Besides being a great, and controversial,  soccer champion – excessive but certainly unique – Maradona also had a great passion for motorcycles and, especially, for Valentino Rossi.

During his visit to Italy, Maradona managed to meet Valentino in the Misano paddock in 2008 (see video HERE), and the opening photo of this piece refers to that encounter. On that occasion, Diego crowned Valentino his “wrist of God”, playing on the nickname that Maradona was given after the famous goal he scored against England in the 1986 World Cup.

Valentino Rossi then celebrated his friendship with the Pibe de Oro by winning at Termas de Rio Hondo in 2015 in a race that, in a certain way, started his great rivalry with Marc Marquez, and that culminated in a contact which put the Spanish rider out of the race. On the podium, Valentino wore Diego’s number 10 jersey from Argentina, a true symbol.

The news about Maradona’s death is few and fragmentary for now, but what’s certain is that a great sports champion has left us in a 2020 that never stops hitting hard.