Very light rain greeted the pole shootout contenders at the start of the session, with Maverick Vinales setting the early pace on his factory Yamaha with a 1m31.9s.

Quartararo came through Q1 and edged ahead of Vinales with a 1m31.889s, with the Petronas SRT rider improving to a 1m30.983s with just under 10 minutes to go.

The Frenchman, along with Rins, trails Mir by 37 points in the championship and clung onto a front row place for some time despite only having one fresh soft tyre at his disposal for Q2.

KTM’s Brad Binder, who topped Q1, also only had one tyre to use for his pole attempt and took over top spot with seven minutes remaining with a 1m30.763s.

Tech3’s Miguel Oliveira had been fastest briefly, but was shuffled back to third when European GP poleman Pol Espargaro leaped up to second to create a potential KTM 1-2-3.

But this wouldn’t last, with Vinales first to spoil KTM’s party with a 1m30.645s to take over top spot, before Jack Miller on the Pramac Ducati fired in a 1m30.287s.

Miller’s advantage at the top of the timesheets was substantial, but not enough to fend off a charging Morbidelli, the SRT rider guiding his Yamaha to a 1m30.191s to claim his second pole of 2020 by 0.096 seconds. 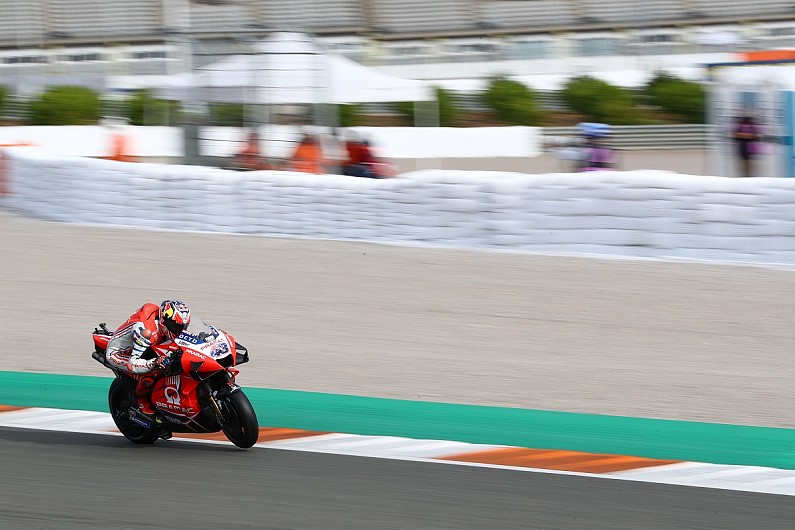 Aleix Espargaro put his Aprilia seventh ahead of Pramac’s Franccesco Bagnaia and Binder, with Oliveira completing the top 10.

Quartararo wound up shuffled back to 11th, but Mir was unable to punish his nearest title rivals after ending up 0.797s off the pace in 12th.

Spots of rain first appeared for the start of Q1, resulting in all but Valentino Rossi heading straight out on soft rubber to try and get a banker lap in.

KTM’s Binder and Quartararo occupied the two Q2 progression places after their first laps, with their following efforts of 1m30.810s and 1m30.959s would ultimately secure them passage into the pole shootout.

The light rain returned for the latter stages, which spelled disaster for Rins who was unable to improve on his 1m31.594s, resigning him to 14th on the grid.

To keep his title hopes alive, Rins needs to be in the podium places to have a hope of the permutations falling his way to delay Mir’s coronation.

Rins will start alongside LCR’s Cal Crutchlow and the Ducati of Danilo Petrucci, while Rossi (Yamaha) heads Andrea Dovizioso on the sister factory Ducati.

Honda’s Marquez suffered a huge highside in the opening stages of Q1 at Turn 11 and landed heavily on his backside – though still managed to return to the circuit on his second bike late on.