MotoGP, Rossi: “Petronas? The satellite teams now look better than the official ones” 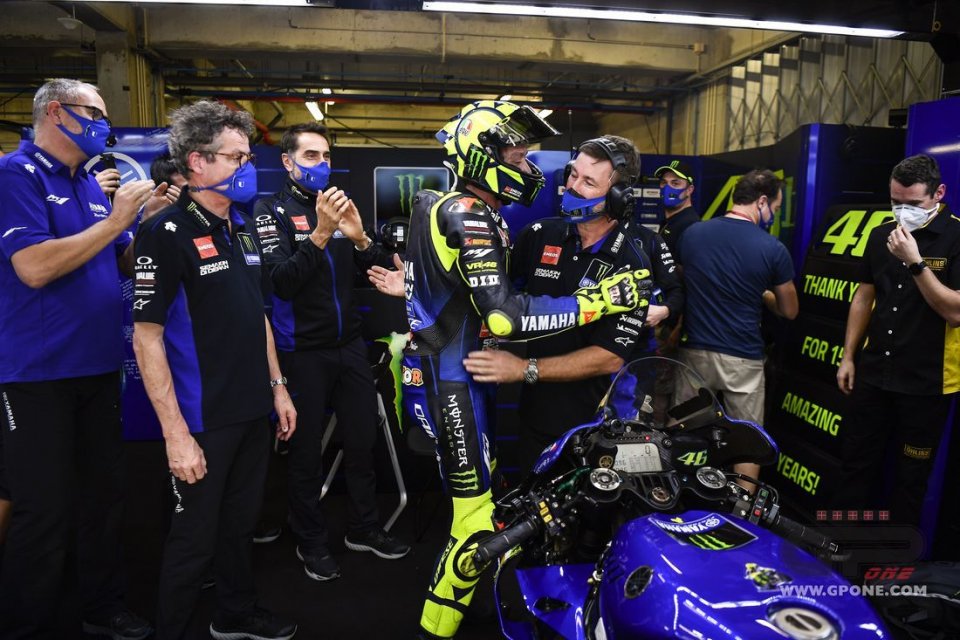 Portimao was the farewell Grand Prix and, after the finish line, it was also time for Valentino to say goodbye to the team with which he wrote the history of Yamaha and that, starting tomorrow, will be officially relegated to memory. Fifteen years together, with a short break when he went to Ducati, are a long and important piece of his life.

“It’s like a good movie, where you have the first and second part, both beautiful and intense,” is how the Doctor described it. “It’s been an important part of my career, but also of my life.”

Next year, he’ll be wearing the Petronas team colors and not the blue of the official team.

“I’ll especially miss the people, since my technical situation will not change much,” he continued. “These fifteen years have been an important part of my life. I’ll leave behind many friends. It was a great emotion when I returned to the garage, because the story is ending even with people who are important to me, like my mechanics, Alex Briggs and Brent.”

He would have preferred something more than a twelfth place to say good-bye in the best way possible, but at least he enjoyed it.

“It was a very close race from fifth place onward. We were all close, and there were many battles,” he said. “I enjoyed it because it was a challenge from start to finish. Unfortunately, I started in the rear, because it took me time to adapt to the track and, on Friday, I tested some things for Yamaha that made me lose faith. In the race,  I was quite fast and above all, constant. The result wasn’t fantastic, but it was a better race than in Valencia. I was much closer to the best.”

Now winter begins, which will not only mean resting for the Doctor.

“I’ll have to work a lot on myself, especially to improve in qualifying. Now, it’s very important,” speaking of the program. “Then I’ll push with Yamaha to do a good job of improving in some areas. For some time, we’ve been fast in the first part of the season, but we’re struggling in the second. Next year, we’ll have a tough challenge, and we’ll have to get ready.”

There were only riders from satellite teams on the podium today. Maybe moving to Petronas won’t be that bad.

“The official team has advantages, because there are more people working on the bike. A numerically superior force,” Valentino explained. “But it also has drawbacks, because there are so many things to test to get development going. In a satellite team, they only focus on performance for the weekend and, lately, satellite teams seem to be working more. Yesterday, in qualifying, the first official rider was seventh.”

How do you think it’ll go between Vinales and Quartararo?

“It’ll be a great struggle to figure out who the alpha male is. The real rooster in the chicken coop rooster,” Valentino said  jokingly. “It could be a difficult situation to manage, but also an advantage, because it’ll motivate both.”

Development will also be in their hands.

“In recent years, I’ve given my soul to try to improve the bike, but we’ve been talking about the same problems for a long time. It hasn’t changed much. I think Yamaha will have to make a difference,” was Rossi’s opinion.