A provisional 2021 MotoGP calendar featuring 20 races has been unveiled, with circuits in Portugal, Indonesia and Russia designated as reserve venues.

The 2020 calendar was decimated by the COVID-19 pandemic, with the original 20-round schedule scrapped in favour of a 14-round calendar focused on Europe which began at Jerez in July.

The 2021 calendar is due to start later than in previous years on 28 March with the night race in Qatar, followed by a double-header in Argentina and America from 11-18 April.

The European season begins with the Spanish Grand Prix on 2 May, with the French, Italian, Catalan, German and Dutch GPs following as per the 2020 schedule.

MotoGP’s return to Finland – which was due to take place this year before the pandemic struck – is scheduled for 11 July, though is subject to the KymiRing receiving homologation from the FIM.

The Finnish GP is scheduled to bring the first half of the season to a close, though it is unclear when racing will resume after the summer break.

The early August date typically used for the Czech GP at Brno between the Finnish and the Austrian GP on 15 August currently has no date or venue, though Brno does have a deal for 2021. 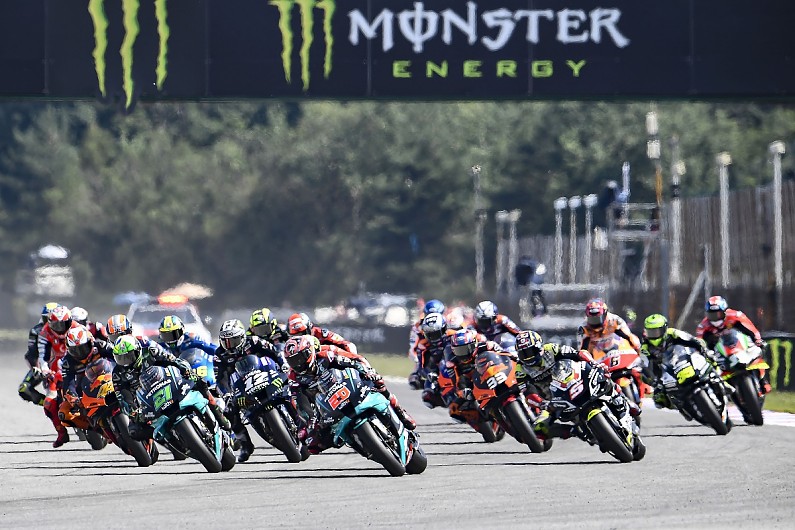 Dorna CEO Carmelo Ezpeleta explained Brno’s current absence is a result of the circuit needing resurfaced following complaints this year, but the changes required have not been confirmed by the South Moravian government yet.

The British GP at Silverstone will return on 29 August, with the Aragon GP moved up to 12 September followed by the San Marino GP at Misano the week after.

The first of the Pacific flyaway rounds is scheduled to be the Japanese GP on 3 October, with the Thailand GP taking place the week after.

Instead of the traditional triple-header at the end of the year, the Pacific rounds are grouped into two double-headers, with the Australian and Malaysia GPs rounding it off on 24 and 31 October.

The championship will finish in Valencia on 14 November.

Due to the unknown nature of the virus, the schedule remains heavily provisional, with MotoGP putting three races venues onto its reserve list.

Portuguese GP venue Algarve is one, while the under-construction Mandalika International Street Circuit in Indonesia is another, and Igora Drive in Russia is the third.

Should the Czech GP not happen, one of these three circuits will then be used instead – though the Indonesian venue still needs to be homologated by the FIM.

It appears Igora Drive does have approval to host MotoGP, with Ezpeleta confirming FIM safety officer Franco Uncini has inspected the venue.