MotoGP, Mir: “I’d rather have #36 on the bike than #1 because I’ve won two world championships with it”

He gives the impression of someone who still can’t believe it, but Joan Mir, even as a world champion, is humble and without excess.

“I feel mentally strong. In the sense that when I was under pressure and didn’t have to fail, I didn’t fail. The pressure also helped me to be even more competitive. The pressure didn’t take my speed away, it gave it to me ”.

The new world champion is going to enjoy this Portimao GP. His smile has been all over the world, and now Mir is a star. But for this reason, he doesn’t just want to make an appearance. “Brivio told me that he would like me to have the #1, but he is not entirely sure because with #36 I have already been world champion twice and it is a number that brings me luck”.

Also for him it will be a weekend full of battles, and Mir wants to end it with a flourish.

“I arrive here in Portugal like every weekend, to give 100 percent and do my best, we’ll see if I have the competitive package to win. If that’s the case, I’ll try to fight for the win and give everything. It’s important, but it’s also important to respect my teammate because we are also aiming to win in the constructors’ championship and we can’t fall sleep, so we both have to get a good result. 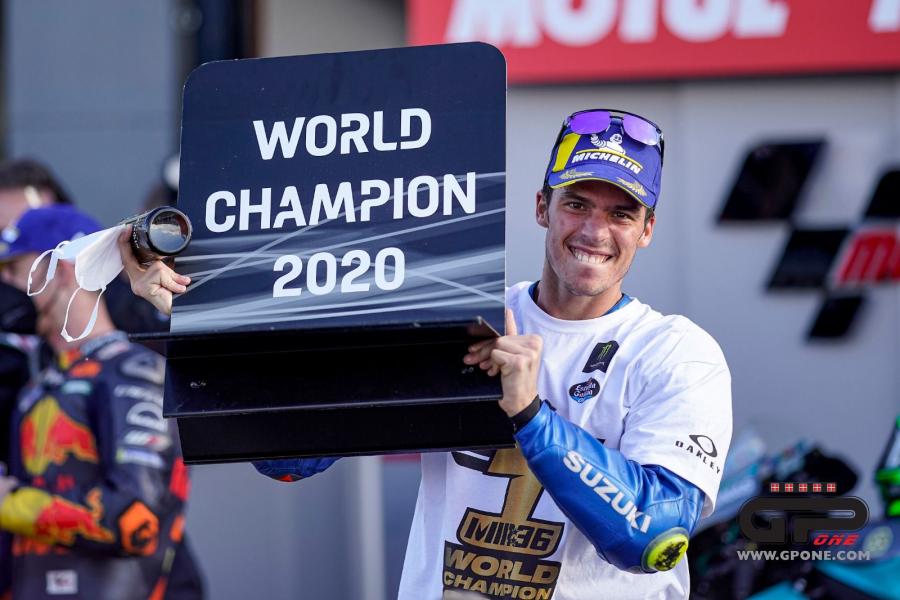 Can you help Alex Rins?

“It is important to see how I can do this. I would be very happy, that’s the truth, but for the situation to arise in which I can help him, Morbidelli must be behind him and, in that case, I have to be first, Rins second and Morbidelli third. Otherwise I think he is on a par with Morbidelli, but Franco has more wins ”.

Mir has a thought for everyone. Also for Albert Arenas, who will fight it out for the Moto3 world title this weekend.

“Albert doesn’t have a lead of many points and can be proclaimed champion, but Moto3 is difficult, he will have to be very determined and take risks, but only up to a certain point”.

“I learned a lot. It’s hard to say what, because inside I have matured more, I was able to take advantage of the good things I had this season, and I did it in the best way, I gave my everything and certainly my speed was not the best. I wasn’t the fastest of all in all the tests and during all the races, but I was the most consistent and usually I was the one in front and this meant that we could use the Suzuki’s good points ”.

“Maybe it wasn’t the bike that could win in many races, but when it didn’t win we were on the podium and we got points. I think I am confident for next year, because we can have a good season if we improve our speed a bit more. And so we took the title without any pole position, so the day we have that speed to do those things, with an even more competitive bike, I think we can do an impressive championship ”.